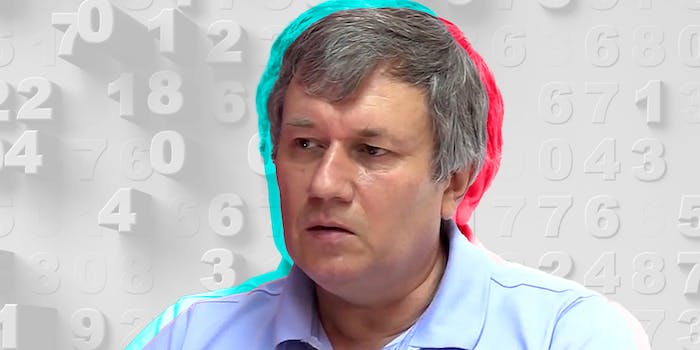 Cheat codes to manifest wealth are all over TikTok—teens don’t know their sordid, antisemitic history

TikTokers are unwittingly promoting the work of someone who tricked grieving mothers into thinking he could bring their kids back to life.

Imagine being so plugged in to the harmonic vibrations of the universe that you and a select few others have found a limitless and foolproof way to manifest anything you want—from vast wealth to perfect health to weight loss to true love. And it didn’t take any kind of investment of time or money. You only need positive intentions, a journal for writing down your manifestations, maybe a few crystals to help, and a string of numbers developed by an antisemitic Russian fraudster imprisoned for fooling the mothers of murdered children that he could bring them back to life.

Known as “Grabovoy Numbers” or “Grabovoy Codes,” these strings of numbers are seen by their believers as nothing less than a cheat code for the universe, a way of bypassing traditional bastions of wealth-building or self-improvement in favor of an easy and free shortcut that will get you whatever you want without any effort. And because there’s little that drives viral traffic more than get rich quick schemes and wellness frauds, a get rich quick scheme that’s also a wellness fraud is almost guaranteed to work for whoever pushes it.

And Grabovoy codes have worked out in that they’ve driven up views on popular videos on TikTok, with tens of millions watching people claim to have manifested great wealth and health for themselves. A typical video of the many on TikTok, this one with well over a million views, has a young wellness influencer claiming that she at first didn’t believe, but decided to try a code for unexpected money by saying it twice while smiling—and she found a coin in a shopping cart lock.

But nothing is quite that easy or simple—least of all anything promising instant success with no effort.

Like so many other crank concepts in wealth and wellness, Grabovoy codes are often pitched by believers as an ancient secret that you aren’t supposed to know about, but are now able to unlock with modern technology. But their origins are both much less interesting and much more troubling than that. They’re just one tool in the pseudoscientific arsenal of 58-year-old Russian mathematician and fraud Grigory Grabovoy (sometimes spelled “Grabovoi”) who has claimed, according to various sources, to be the living manifestation of Christ, a cult leader, and a mystic healer who could cure AIDS and read minds.

Part of a long and lucrative Russian tradition of occult scammery, Grabovoy was already a minor celebrity there thanks to TV appearances based around his supposed “psychic gifts.” But he became a household name after he generously offered to resurrect children murdered in the 2004 Beslan school siege, when over 170 students were killed by Chechen separatists in an attack on a Russian school. Taking advantage of bereaved and traumatized mothers desperately trying to make sense of the deaths of their children, Grabovoy charged $1,500 per resurrected child (payable before their resurrection), and even charged mothers for attending his group “healing sessions,” turning this massive cluster of grief into a lucrative grift.

After running wild in the small town of Beslan and forming something looking very much like a cult based on his divine healing powers and status as the second coming of Christ, Grabovoy was arrested by Russian authorities. He was given an eleven-year prison sentence, though he served just three and got out in 2010, disappearing from public view after that—with the first books of “codes” appearing on Amazon the next year.

He continues to have a small, vocal contingent of Russian mothers who believe in his “technology” for resurrecting people, despite never having actually resurrected anyone. He’s also made statements blaming Jewish elites for the problems of the world, and has claimed that he would ban death after being elected Russia’s next president—a trait his fans believe was one of the “real” drivers of his arrest.

And that was all before the viral popularity of the “cheat codes for the universe” that bear his name. It’s not clear how Grabovoy numbers jumped from the mind of a Russian psychic to zoomer viral videos, but there are Pinterest pages full of codes going back to at least 2016, books on Amazon with the codes as far back as 2011, and a U.K. tabloid article from February 2020 that mentions a Hong Kong-based actor who started writing codes on his arm to prevent contracting COVID-19, possibly as a joke.

The codes themselves are simple strings of numbers, such as “520 741 8” for “unexpected money” or “91 582 7139” for “addiction to pain medication.” They were supposedly developed by Grabovoy, as one manifestation blog put it, on his “Radionic machine.” They are based on the theory that “all people and life forms share common ground; through electromagnetic field [sic] of the earth we are all connected in some way.” In this case, “radionic” is defined as “the metaphysical science of local and distant manifestation using intention programmed instruments and patterns […] to amplify, store and elevate subtle frequencies of the animate and inanimate form.”

Every single word of the last paragraph should reveal that “Grabovoy Codes” are numerological nonsense based in non-existent and potentially dangerous scientific crankery. Speaking or writing numbers doesn’t manifest anything, much less everything you desire. But if that’s not enough evidence that the codes are a scam, the way the codes actually are meant to work should remove any doubt that they do. Generally speaking, the more conditions a pseudoscientific treatment claims it cures, the less it actually does. The same hold true for Grabovoy Codes, with their believers’ lofty claims of curing cancer and becoming instant millionaires. Nothing does all of those things. Beyond that, there’s no consistent way to use the codes, another sign of pseudoscience at work. Even a TikTok video about the codes with more than six figures in views claims merely that there are “a bunch of different ways to use these numbers.”

There are indeed a bunch of different ways to use Grabovoy numbers. You can recite them while feeling good or positive about what you’re attempting to manifest, you can write them down with or without your birth date, you can concentrate on them during guided meditation, you can listen to repetitive electronic music that features someone chanting them, you can write them on your body (the inner wrist and arms are popular areas), you can draw them in the air, or even just speak them aloud while holding crystals or not holding anything at all. There’s also no consistency on how long you have to use them, how often you have to write or recite each number, or even what language they should be spoken in. Because Grabovoy Codes don’t actually do anything, there’s no right or wrong way to use them. All that matters, according to believers, is that you imagine the thing you’re supposed to get. And their believers do truly think (or at least convincingly claim) to have used the codes to short-circuit the matrix, getting everything from cash and cars to good grades and better jobs.

Despite the idea of “cheat codes for the universe” catching on via social media, there’s very little new ground being broken here. The idea of using pseudoscience or good intentions to manifest getting things you want has been in popular culture since at least when Norman Vincent Peale hit the bestseller list with his book The Power of Positive Thinking in 1952. And unlocking the secrets of supposedly mystical numbers is a popular concept in various holistic, paranormal, and conspiracy theory circles; encompassing everything from New Age numerology to the medieval Kabbalist gematria, substituting numbers for Hebrew letters to decode a “secret message” hidden within texts. So it makes sense that someone would combine them as something new and give it a social media-friendly sheen, and that the combination would catch on with pandemic-weary Gen-Z TikTok users looking for the next trend.

And it has caught on. Beyond the viral TikTok videos racking up millions of views, there are hundreds of Grabovoy-themed items for sale on Amazon; including dozens of books supposedly written by the man himself, promising everything from business success to eternal life. Amazon also has CDs and MP3s full of chanted codes, Grabovoy-themed journals, and links to dozens of other self-help books that work the same side of the street as Grabovoy codes. Beyond TikTok, you can find hundreds of Grabovoy videos on YouTube, including one from 2019 featuring codes for “money and wealth” that has nearly 160,000 views, and a channel with videos about “Grabovoi Numbers, Switchwords, Agesta Sacred Codes, and Meditation Music in 432Hz” with more than 38,000 subscribers. There are even a few small Grabovoy code groups on Facebook, though none appear to have more than a few thousand members.

At this point, it’s fair to ask what the harm is in people attempting to use Grabovoy numbers to manifest things they want to happen. There’s nothing inherently wrong with positive thinking, and as long as someone isn’t actively harming themselves or others by attempting to use the codes, there’s probably no reason to worry about their use. Where there is cause for concern, though, is in the originator of the codes himself: a convicted scammer and antisemite with something of a cult of personality around his claimed abilities.

Grabovoy himself appears to have never spoken about his “codes,” and it’s difficult to tell who actually wrote the books supposedly attributed to him. But it’s clear that he has all the attributes of someone who could successfully run a cult in the west, if he desired to do so—especially with the growing young, social media savvy following built around his esoteric “secret knowledge.”. It’s unclear how many people using the codes are doing so as a joke or in the spirit of trying anything once, and how many are actually taking them seriously. It’s hard to tell how many people using them even know Grabovoy’s sordid history. But if the codes continue to go viral on social media, and they continue to generate more clout and money for the people espousing them, their following could explode.

At that point, it will become harder and harder to manifest Grabovoy codes out of existence.