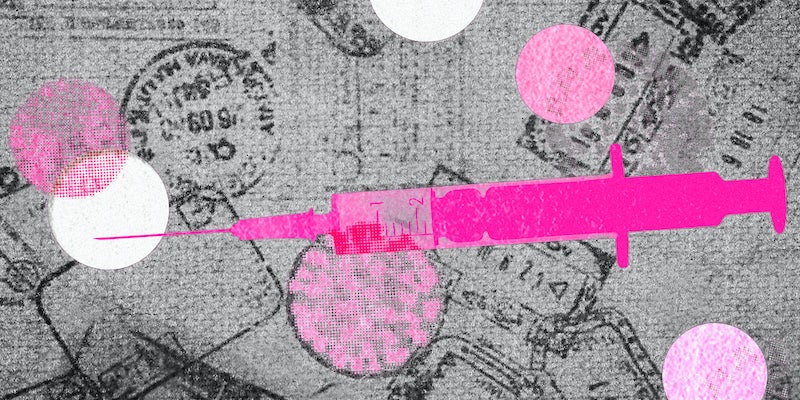 Welcome to the ever-expanding world of vaccine passport conspiracy theories

Like everything with COVID-19, vaccine passports are now the locus of conspiracy theories.

Since COVID-19 first emerged as a global pandemic, virtually every facet of treating and preventing the illness has been steeped in controversies, culture war arguments, and endless conspiracies. Simple preventive measures and complex ones alike have all been fuel for a massive complex of conspiracy mongers who see masks and lockdowns as, at best, feel-good virtue signaling, and at worst, signs of societal submission to egomaniacal scientists.

Now that there are multiple COVID-19 vaccines, they too have become steeped in conspiracy theories, many of which are the same as the conspiracy theories already afflicting the immunization industry, such as notions that the vaccine wasn’t properly tested or that it re-writes the DNA of its recipients. With a growing number of Americans fully vaccinated, even the way these people prove their vaccination status has become fodder for plots alleging government overreach and population control.

Welcome to the expanding world of vaccine passport conspiracy theories.

What are vaccine passport conspiracy theories?

Like most conspiracy theories, this one starts off with a grain of truth and grows into something fake. Everyone who receives any of the COVID-19 vaccinations also receives a card detailing which shot they got, when they got it, and where. This verification card, also known as a vaccine certification or passport, serves as proof of inoculation for the growing number of businesses that have announced they’ll require patrons to be fully vaccinated.

With the cards proving easy to lose or misplace, a number of entities are looking for electronic solutions to allow people to easily prove their vaccination status. The Biden administration is coordinating with private sector entities and government agencies to streamline the dozen different vaccine status initiatives that are already being created. The goal is for easily accessible systems that allow users to pull up their vaccine status in a way where the data can’t be hacked or exploited, and that doesn’t leave out low income or less technologically inclined populations. The government has already ruled out mandating the use of such passports, but feels it’s in the best position to coordinate these wide-ranging efforts.

Naturally, the conspiracy theories about both the vaccines and the need for tracking them have grown alongside the numbers of fully vaccinated people.  But any system of electronic identification, even those that don’t specifically store data, has the potential for misuse. So it’s worth getting more into both the history of such verification, and the origin of the theories purporting that there’s some kind of nefarious “real” purpose to them.

Immunity passports didn’t start with COVID-19. In the aftermath of the First World War, nations began enforcing their borders much more strictly, both because of treaty obligations and because of the devastation brought by the flu pandemic of 1918. Travelers attempting to cross European borders were subject to medical examination to ensure they didn’t bring influenza across national lines. Some countries even demanded “vaccination certificates” that proved their immunization status.

These measures proved controversial at the time, and were extremely difficult to enforce. Skip ahead a century, and technology has made the enforcement of vaccine requirements much easier. But the controversy over potentially violating the privacy and civil rights of “passport” holders hasn’t abated at all. In fact, it’s been sucked into the same never-ending churn of conspiracy theories that’s been going on as long as COVID-19 has been around.

To anti-vaxxers and social conservatives, vaccine passports take an already bad thing (what they think of as a rushed and unnecessary vaccine) and make it even worse. And as with virtually every culture war issue of the last decade, the debate is not especially reasonable. To these people, vaccine passports or any other electronically stored and mandated record of vaccination is just another COVID-inspired rung on the ladder of globalist control that eventually ends in a “great reset” and mass tracking or culling of “useless” populations.

A Town Hall op-ed compared the very idea of electronically stored vaccination records to the Soviet Union’s internal passport system, while others against the idea brought up notions of vaccination status being examined by secret police demanding to see “your papers.” Republicans in office used their platforms to spread the conspiracy theories as well, such as South Dakota Gov. Kristi Noem (R), who called them “un-American;” with House Minority Leader Kevin McCarthy (R-Calif.) calling the idea “something you’d see in Communist China;” and Rep. Ronny Jackson (R-Texas), who as a former White House physician should have presumably known better, tweeting “I’ll NEVER use a government mandated ‘vaccine passport’ and neither should you!” House Republicans even sponsored a “No Vaccine Passport” act to prohibit the federal government from getting involved in tracking vaccination status.

Right-wing media has hammered the same plots, with various Fox News talking heads decrying the idea as unconstitutional, a power grab, and “Orwellian.” And conspiracy-friendly sites are lit up with theories as well, such as the popular Reddit forum r/conspiracy, where some of the most trafficked threads of the past month are calling them a “state-based reward/punishment system” and claiming the media is labeling anyone opposed to them as a conspiracy theorist. The idea of immunity passports being a digital version of the yellow Stars of David that Nazi Germany forced Jews to wear as identification has also gotten popular on social media. Some threads explicitly put vaccine passports on a slippery slope of freedom-destroying measures related to the pandemic, usually using some variation on “it’s just a mask, it’s just a lockdown, it’s just a vaccine,” hinting that the ultimate goal is the total enslavement of the population with COVID-19 as the excuse provided.

The theories get to be so hyperbolic that it starts to become hard to tell what exactly the people espousing them are upset about: the idea of COVID-19 vaccinations themselves, the federal government electronically storing them, or private companies requiring proof of vaccine status to partake of their services.

Certainly, there are genuine privacy concerns about the issuance and storage of vaccination records, particularly whether they’ll be vulnerable to hackers, and what else governments might do with the information they’ve gathered. And a number of civil liberties and digital privacy groups, including the ACLU and Electronic Frontier Foundation, have expressed real issues with vaccine passports being a step toward a government-mandated digital identification system—which could either be stolen or used to discriminate against those who haven’t been vaccinated or don’t have such identification.

But to be clear, many of these conspiracy theories are not only overly dramatic, they aren’t based in reality. As of now, there’s no real consistent definition of what a vaccine passport will actually be, how it will work, who will maintain it. So far, the most likely version will be some sort of electronically stored document or app that can be pulled up and scanned by an entity that requires vaccination. The Biden administration has already said several times that it will not be directly involved in the development or storage of easily accessible vaccination records, only helping coordinate efforts between state health agencies and private companies. The administration has also said it will not be requiring anyone to obtain such a document. But in a twist that any free-market conservative should theoretically enjoy, it’s primarily been private companies that have said they’ll require them. Among these are cruise lines, airlines, sports and concert arenas, and colleges. Some countries are beginning to mandate vaccination for tourists, but this is voluntary travel, rather than a “your papers, please” dystopia where citizens can be arrested simply for non-compliance.

Beyond that, every state in the United States requires not just that students be vaccinated against other diseases, but that the student’s parents supply proof that they’ve been vaccinated. Even without apparent solutions for the legitimate privacy and data security issues brought up by electronic vaccine confirmation, it’s clear that these documents do not do what their detractors think they do and are merely an updated version of the same vaccination records that various countries and states have been requiring for a century.

Because a “vaccine passport” stored electronically is the same one every vaccine recipient already gets on paper.