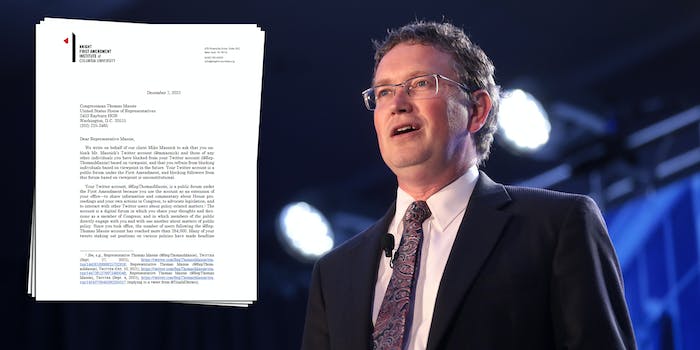 An advocacy group is reminding him that blocking Twitter critics violates their First Amendment rights.

Rep. Thomas Massie (R-Ky.) is being reminded that he cannot block people on Twitter because he’s mad they didn’t like his gun-filled Christmas photo.

Earlier this week, Massie tweeted a photo of his family standing in front of a Christmas tree. All of the family members were holding large guns. In the tweet, Massie wrote: “Merry Christmas! Ps. Santa, please bring ammo.”

The tweet went viral, with many people criticizing the Kentucky lawmaker for posting it. Rep. Lauren Boebert (R-Colo.) also responded to the tweet by posting one of her own, which showed her younger children holding guns around a Christmas tree.

But Massie seems to have blocked some Twitter users who found the tweet objectionable—and now he’s being reminded that he can’t do that.

Mike Masnick, the editor of TechDirt, pointed out that by blocking Twitter users, Massie was violating the First Amendment. In 2019, the United States Court of Appeals for the Second Circuit ruled that former President Donald Trump blocking critics on Twitter was unconstitutional after the Knight First Amendment Institute at Columbia University brought a lawsuit against the administration.

Now Massie is being reminded that he can’t do that.

On Tuesday, the Knight First Amendment Institute sent a letter to Massie explaining that he was violating people’s rights by hitting the block button.

“Multiple courts have held that public officials’ social media accounts constitute public forums when they are used in the way that you use the @RepThomasMassie account, and they have made clear that public officials violate the First Amendment when they block users from these fora on the basis of viewpoint,” the institute wrote in the letter.

The letter also notes that other Twitter users have said they were blocked by Massie.

Massie is not the only lawmaker who has needed a reminder. Last year, Sen. John Cornyn (R-Texas) was also sent a letter from the Knight First Amendment Institute after he blocked users who criticized his response to the coronavirus pandemic. Rep. Alexandria Ocasio-Cortez (D-N.Y.) also apologized for blocking a critical Twitter user.

The Daily Dot has reached out to Massie’s office for comment. We’ll update this story if we hear back.