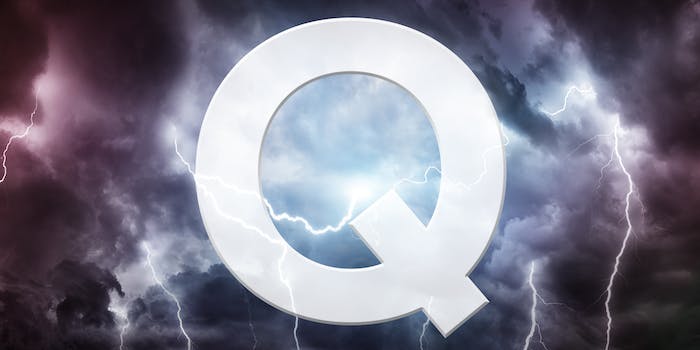 How memes became the main language of QAnon

Mike Rothschild's 'The Storm Is Upon Us' is out today.

The following is an excerpt from The Storm Is Upon Us: How QAnon Became a Movement, Cult, and Conspiracy Theory of Everything, by Mike Rothschild. You can purchase a copy of Mike’s book here.

Before the internet, believing in a conspiracy theory took work. You had to know which dank bookstore to patronize and which gun show or truck stop was selling the hot new anti-Clinton video, or find the right shortwave radio broadcasts about U.N. storm trooper invasions. None of those limitations did anything to impede belief, of course. But it at least formed a barrier to entry for potential believers. And it made spreading these theories to the uninitiated more difficult.

As the internet moved from experimental to omnipresent, conspiracy theories were suddenly much easier to find and spread.

Unseen by the media and unchecked by the social platforms, Q believers were developing a method of communication that was simple and clear to people who spoke the language, while being totally incomprehensible to outsiders. In particular, Q acolytes mastered the use of memes, the jokey images spread around the internet as shared cultural touchstones. Memes have been part of the internet since modems had enough baud to download them—going back to the mid-1990s, when a creepy, blocky dancing baby went from an awkward internet meme to a running gag on Ally McBeal as it gyrated to “Hooked on a Feeling.”

And they’re a hugely important part of the discourse in places like 4chan, popularizing everything from goofs like LOLcats and Rickrolling to horribly destructive movements like the harassment of women journalists under the GamerGate banner. As someone versed in the speech patterns of the chans, the Q poster clearly knew the importance of memes in communicating the mythology. In turn, Q drops are full of exhortations to readers to make memes and disseminate them as a way of avoiding Big Tech censorship and algorithms, going all the way back to Drop #532 in January 2018:

POTUS may reTWEET [sic] one or more.

Q fanatics were, indeed, ready for launch. They spoke extensively on 8chan about the importance and power of memes to share the narrative, wake “normies” up to the corruption of the deep state, hijack trending hashtags, disseminate research, and of course, make liberals cry. “Strategically, these type [sic] of memes are VERY important,” declared one anon a few days after Q’s call for memes, continuing:

1. Because it shows foreknowledge and validates Q/POTUS intel if they *do* roll them out

2. Because it may save innocent lives if (((they))) [the three-bracket symbol used on chan sites as a code for Jews] are forced to discard the strategy

3. Because forewarning the people (and comforting them that the military, intel and law enforcement are on the job)will truly offer calm if that part of deep state’s strategy *is* employed in the storm.

Another 8chan poster commenting in response to Q’s initial call simply declared, “We have a lot of memes to create!” Q would extol the power of memes to spread the message and defeat censorship many times, with followers responding to the call every time. And it made a certain amount of sense. Q’s mythology of an all-powerful deep state at war with a cadre of woke patriots was hopelessly insular and extremely difficult to describe in words without seeming like a crank. But attention-grabbing memes depicting Democratic luminaries in prison with the text of a Q drop or Oprah Winfrey exclaiming “you get to go to JAIL!” could be interpreted by anyone.

This is how Q presented itself to people finding it for the first time: not as red-string-on-corkboard conspiracy madness, but the vague dread that “they” were doing terrible things and didn’t want you asking about it.

Pictures are a universal language. And memes in particular are so easily shared and understood that formerly anodyne message boards and Facebook groups dedicated to sharing mildly amusing pictures became infested with Q images and iconography. One was Giggle Palooza, a Facebook meme group with over 1.5 million members that was radicalized into a dumping ground for right-wing conspiracy theories during the pandemic, transforming from a space for harmless memes about coffee and grandchildren to ones screaming about Hillary Clinton and martial law. All of it was driven by a page owner who identified as a pastor and QAnon believer—and the newly “awake” posts routinely got thousands of likes and shares.

In QAnon, there was no room for puns or images of Garfield complaining about things—it was all digital war, all the time.

As the relationship between Q and Trump became more obvious in public, Trump would routinely share Q memes and slogans, often acting like he had no idea what they were about. Even in early March 2020, as COVID-19 panic began to settle over the country, Trump responded to the chaos and fear not with a speech or a rhetorical exhortation for Americans to socially distance, but with a meme—of him playing a fiddle with the text “MY NEXT PIECE IS CALLED . . . NOTHING CAN STOP WHAT’S COMING,” with Trump himself adding, “Who knows what this means, but it sounds good to me!”

Plenty of people knew what it meant. By that point, memes weren’t just a communication tool or a way to proselytize—they were a weapon. In Drop #2189 Q would order followers to “lock” memes “on target,” and to “fire at will,” viewing them as important to a digital war as bombs and bullets were to a physical one. Even social media companies making token efforts to stop Q memes were folded into the Q mythology, with 2018 drops pointing out software that Facebook started using to filter out conspiracy and inflammatory memes—which Q “autists” (their preferred term) attempted to defeat with blurred fonts and reversed pictures. Memes were a critical tool for harassment, and they could easily be spread by bot networks and burner accounts. And anyone who ran afoul of Q or its believers could expect to find themselves on the wrong end of a firehose of social media–driven harassment and graphic memes.

You can purchase a copy of Mike’s book here.