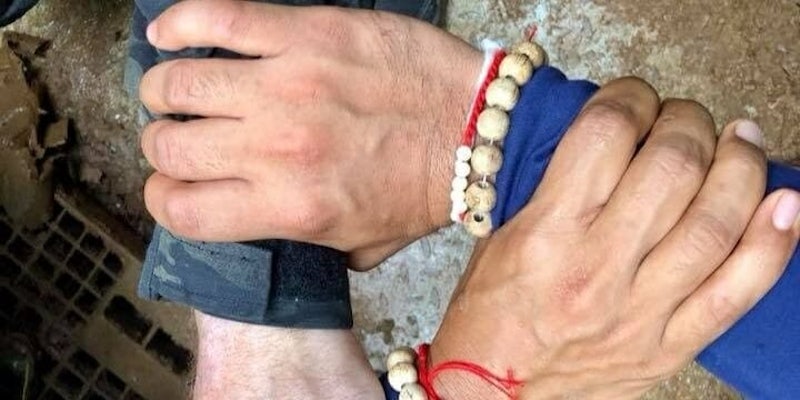 All 12 boys, and their coach, rescued from Thai cave (updated)

Update 7:40am CT, July 10: All 12 boys, and their coach, have been rescued, the Associated Press reports. The team went missing more than two weeks ago.

Update 6:53am CT, July 10: Eleven boys from the Wild Boars soccer team have been rescued from the Thai cave. Only the coach and one more boy remain in the Tham Luang caves, according to CNN.

Days after it was discovered that a Thai boys soccer team became trapped in a cave, multiple members of the squad were rescued on Sunday.

According to the New York Times, via the Thai Navy SEAL Facebook page, at least four boys were led to the surface. Some reports said six of the team members had been rescued, but thus far, only four have been verified.

And some of the photos are inspirational.

Thai Navy SEAL posted a photo of three members holding onto each other’s wrist with a caption:
“We the THAI Navy SEALS along with the international diver team, are ready to bring the soccer team home!” pic.twitter.com/kMoVgRCSlo

Divers escort at least three of the Thai boys out of a cave where they've been trapped for two weeks by flood waters, a witness said https://t.co/FlUdX91Flo pic.twitter.com/qinjMVaKBa

Rescue operations to bring out the 12 Thai boys of a soccer team and their coach from a cave is underway. The team were trapped there for more than two weeks. So far, 6 boys have been rescued. The op. continues

Now we have an ambulance pulling up towards the cave again pic.twitter.com/t5Xktz7ASs

Ambulance going up. Fourth I’ve seen in this short amount of time. pic.twitter.com/ADl47EHYCg

The 12 boys and one of their coaches became trapped in last month after they visited the cave following a team practice. Rising waters blocked their exit, and they were discovered earlier this month as diving lines were laid to bring food, water, and other supplies to the team members.

Now, at least one-third of the team has been brought back to the surface.

The boys and their coach will be brought out one at a time by 13 foreign cave divers and five Thai Navy SEAL divers who were participating in the arduous rescue attempt … He said the boys had been preparing for days to come out through long, flooded passageways that are challenging even for the most skilled cave divers, who must navigate openings so narrow that only one person can go through at a time. Each boy will have two divers trying to bring him out.

Further complicating the operation is that the boys do not know how to swim, said divers participating in the rescue effort.

On Friday, Tesla CEO Elon Musk said he would send engineers from his SpaceX and Boring companies to Thailand to help in rescue efforts.

The effort to rescue the remaining team members and coach will reportedly resume on Monday.