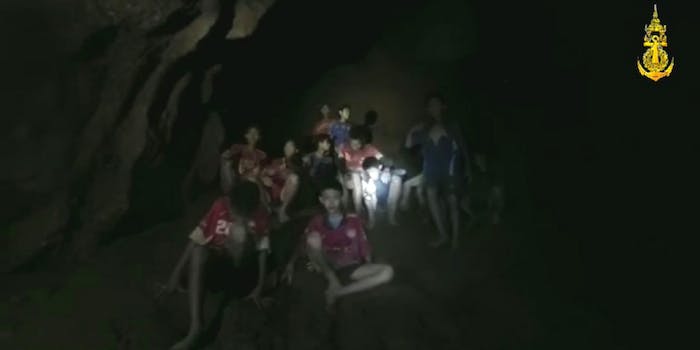 It could take months to get them out of there, though.

A Thai soccer team and their coach have been found in stable condition in underground caves after having gone missing for 10 days.

In video footage uploaded by Thailand’s Navy SEALs, two British divers shine flashlights on the boys of the Moo Pa (Wild Boar) soccer academy, ages 11 to 16, and their coach, 13 people in total. The divers tell the boys that more people are coming to rescue them.

According to BuzzFeed News, Thailand has hosted vigils near the entrance of the cave since the team disappeared on June 23 and focused on rescue efforts. The coach is thought to have brought the boys to the caves for a visit after their practice, but they were blocked in by rising waters. The team was reportedly found in a section of the six-mile-long Tham Luang Nang Non cave complex, about 1.2 miles into the cave and half a mile underground.

While the team has been found, and its members determined to be in stable condition, the floodwaters prevent the boys and coach from being rescued immediately, possibly requiring months for the rescue mission to be completed. The British Cave Rescue Council has laid diving lines to bring the team supplies including food, water, and other necessities.

And while rescuers have the option of waiting out the monsoon season for a “short break” to rescue the boys, they may also train them how to dive through the flooded caves.

“[We will] prepare to send additional food to be sustained for at least four months and train all 13 to dive while continuing to drain the water,” Navy Capt. Anand Surawan said in a statement from Thailand’s armed forces, BuzzFeed News reported.