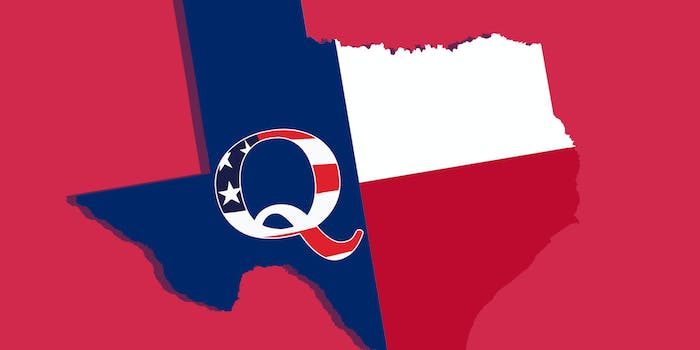 Congress could add more QAnon followers in the midterms.

With its first-in-the-nation primary date for the 2022 midterms, Texas had a chance to either reject or accept candidates running for office who endorsed QAnon.

The results were mixed.

One Texas congressional candidate who spread QAnon conspiracy theories won and another is in the lead in the Texas primary. Two others were resoundingly defeated.

Republican Mayra Flores won her primary in Texas’ 34th district. As of this writing, the New York Times reports that Republican Johnny Teague has a 15-point lead in Texas’ 7th congressional district, with nearly two-thirds of the vote counted.

Both Flores and Teague have been identified by Media Matters as followers of the QAnon conspiracy theory that the world is controlled by a cabal of satanic, cannibalistic pedophiles who former President Donald Trump is in a secret war against.

Flores has used QAnon slogans and hashtags on social media; Teague has done the same, including retweeting the conspiracy theory about John F. Kennedy Jr. still being alive.

Two other QAnon supporters were resoundingly defeated in their Republican primaries: Jason “Storm” Nelson and Ruben Landon Dante, who were running in the 17th and 14th districts, respectively.

As the Daily Dot previously reported, Nelson attended the Capitol riot and appeared on prominent QAnon influencers’ podcasts in recent months to promote his campaign. Nelson deemed questions about whether he believed in the QAnon conspiracy theory “libelous” and “misinformation.”

Media Matters reports that Dante also prolifically spread QAnon online and even paid for a Facebook ad that included a hashtag associated with the conspiracy.

Nelson finished second against incumbent Rep. Pete Sessions with 12% of the vote with more than 95% of precincts reporting, the Times reports. Dante placed a distant third in his race with 3% of the vote.

Independent Jake Armstrong has also reportedly expressed support for QAnon. As the only independent in that race, Armstrong will likely be on the ballot in Texas’ 17th congressional district in November.

The results in the Texas primary don’t necessarily shed light on the future of the dozens of QAnon followers seeking office, although it may portend possible difficulties. In 2020, Rep. Lauren Boebert (R-Colo.) was able to unseat a Republican incumbent in a district that skewed heavily Republican.

Both Nelson and Dante went up against incumbent Republican representatives, a hurdle the two could not overcome.

Teague, if he wins the primary, will face incumbent Rep. Lizzie Fletcher (D-Texas) in November. While Teague is leading in the race, because no candidate is currently above 50% as of this writing, Texas’ 7th District could go to a run-off.

Meanwhile, Flores will take on incumbent Rep. Vicente González (D-Texas). The two were able to win their primaries in districts where Democrats have more than a 10-point advantage, meaning their election to Congress is unlikely.

The nation’s next 2022 primary is in Ohio, where two QAnon-supporting candidates are running.