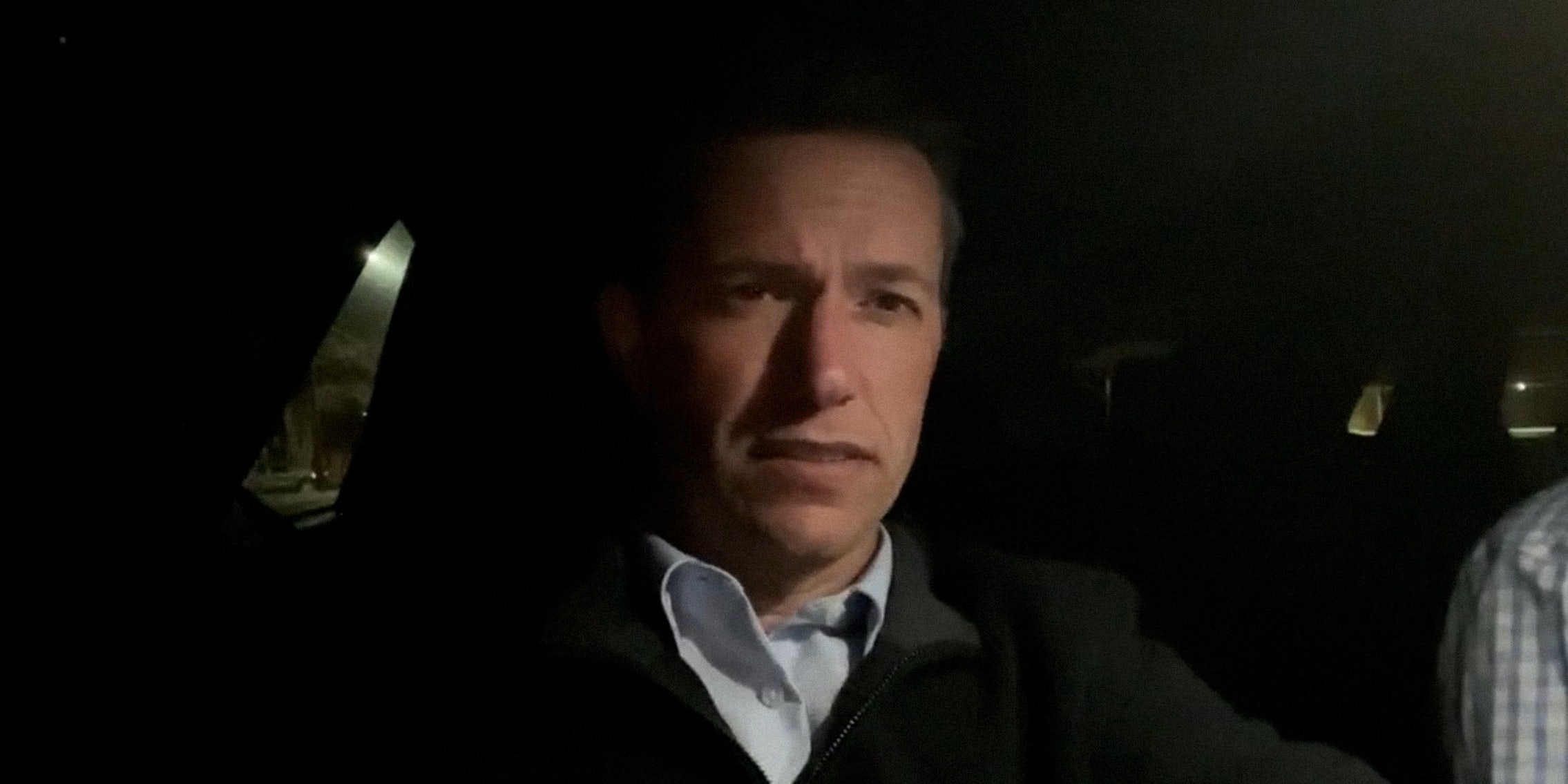 QAnon has 'been right on everything,' he's said.

A congressional contender in Texas who attended the Jan. 6, 2021 Capitol riot is a prolific spreader of QAnon conspiracy theories. Jason “Storm” Nelson has frequently expressed these views on social media and in recent appearances on the podcasts of prominent QAnon followers.

Nelson is challenging incumbent Rep. Pete Sessions (R-Texas) in the district that includes Waco, Texas. If Nelson wins the Republican primary, he has an arguably easy path to victory. Former President Donald Trump won his district in 2016 and 2020. According to the Cook Political Report, Republicans have a nearly 10-point advantage in the district. As a disabled combat veteran, Nelson could easily appeal to voters. He’s also employing a strategy of running to the right of Sessions and portraying his opponent as a RINO, or Republican in name only, which has been increasingly effective in recent years.

Nelson moved to Texas last year. In September, he tweeted that he’d told his daughter they moved so she could go to a good school. In April, he wrote he felt compelled to tell Texans who asked why they moved there that “we vote the way they live their lives.”

Now, he wants Congress to move in the way he lives his life.

Nelson believes the 2020 election was stolen. He’s convinced the COVID-19 pandemic was plotted by mysterious forces. And he’s made fighting pedophilia a central tenet of his campaign. All these beliefs are shared by QAnon followers. He also calls himself “Storm” or “Storm Chaser.” Talking about “the storm” is popular in the QAnon crowd, which they’ve dubbed the moment all Trump’s opponents will be executed or jailed.

It’s not known whether Nelson’s nickname is related to the conspiracy.

Nelson declined to answer the Daily Dot’s questions about his campaign for Congress. Via email, he portrayed reporting about his nickname, previous Twitter handles, observations at the Capitol riot, whether he’s a QAnon follower, or if he believes the 2020 election was stolen as “idiotic,” “libelous,” and “misinformation.”

In an email early Friday morning, he said that his campaign website addresses most of the issues inquired about. “However, if you can’t read (as I’m assuming), use your slave-made phone to read it to you,” he said. Nelson’s website doesn’t reference pedophilia or child sex trafficking, the Capitol riot, his nickname, or Twitter handles. It includes brief a section on election integrity that doesn’t mention the 2020 election or fraud.

This week, Media Matters reported that Nelson had appeared on a QAnon supporter’s show, where he praised the conspiracy theory for highlighting child trafficking and corruption in government.

“It’s been right on everything. Somebody really smart must be—have pushed that from the beginning,” he said of QAnon.

Nelson laughed off Media Matters’ report, tweeting that it meant he was “over the target.” He also suggested that he praised QAnon “hypothetically,” though in the interview he said that “I will never be embarrassed to stand with truth.”

He also said QAnon has never been wrong.

The Daily Dot found that Nelson has been expressing QAnon-esque beliefs about mass conspiracies, pedophiles, and false flags for years.

Like many QAnon followers, Nelson is anti-vax. He says he recently left the Army five months shy of retirement because he wasn’t willing to get vaccinated for COVID-19. He’s called Dr. Anthony Fauci a “psychopath” and vowed to haul him before Congress yet again should he be elected. He proudly claims to be the “original anti-Fauci candidate.” He loathes the lifelong public servant to such a degree that he’s taken to using “Fauci” as a substitute for “fuck.”

On a recent podcast, he opined that hydroxychloroquine and zinc “would’ve saved so many lives.” When the host brought up Nazi Germany purportedly depriving people of lifesaving medicine, Nelson said of the Nazis, “You know what they say. The trains ran on time, right?”

In September, he tweeted that the pandemic—which he has called the “second greatest psyop” of all-time—hadn’t ended because “they” don’t want it to. Nelson has claimed he knows the “designer” pandemic is a psyop, or psychological operation, because he worked in civil affairs while enlisted in the Army. On Feb. 6, he tweeted that “the virus was released” in September 2019.

“It almost feels like it was on purpose. For control, for an election,” he said on Feb. 7 during an appearance on the podcast of QAnon conspiracy theorist Jeffrey Pedersen aka In The Matrixxx. During the show, Pedersen asked the audience to donate to Nelson’s campaign.

Nelson has a particular fixation on pedophilia and human trafficking. “Actual children are being smuggled. Real children,” he said on QAnon conspiracist Ann Vandersteel’s show on Jan. 25. On Pederson’s show he said, “Right now there’s a child shackled around their ankles chained up in a basement somewhere waiting to be abused.”

He often tweets about these subjects.

“Why are so many serial sexual predators rich & powerful Democrats?” he wondered on Twitter last August.

Given his account history, it’s little surprise that over the years, he’s interacted extensively with QAnon followers on Twitter. In December 2020, Nelson wholeheartedly agreed when someone opined that Ron Watkins, who’s widely believed to have played the role of Q, is a “hero.” A few weeks later, in the midst of Twitter’s purge of QAnon accounts, Nelson tweeted sadly, “They are silencing my friends.”

Nelson joined many QAnon followers at the Capitol riot. He has not been charged with a crime or accused of any wrongdoing associated with the riot.

That day, he live-tweeted from the protest that became the insurrection attempt. Minutes after CBS News reported rioters swarmed the west block of the Capitol, Nelson posted a video showing people streaming in the building’s direction. “MAGA took the hill,” he wrote. Minutes later, Nelson tweeted that he heard a series of explosions he assumed to be crowd control. Shortly thereafter, he said that he’d left the premises in the interests of his security.

It’s not clear what Nelson heard. There were explosive devices found that day, but no confirmed reports of explosions.

Later that day, Nelson began falsely claiming that the violence and mayhem was perpetrated by “agitators,” including “antifa,” which was a popular pivot among the far-right after the day’s events got out-of-hand.

From his first tweet on June 15, 2020, Nelson has been intensely political. He swiftly waded into debates about racism and politics and became one of those accounts who frequents the comment sections of prominent political figures. There were also shades of QAnon from the beginning. The day he joined Twitter, Nelson tweeted thanks to someone for “shining the light on sexual abuse.”

Before running for Congress, Nelson tried his hand at a satirical political media company: the short-lived Red Dawn News. Red Dawns News appears to have launched in November 2020; today, only a few videos and archives remain.

The YouTube videos and posts by Red Dawn News are a mix of ham-handed efforts to satirize the media and accuse President Joe Biden of remaking the United States in the image of communist China.

As the name implies, Red Dawn News was hyper-focused on China and communism. Many of Red Dawn News’ tweets and posts could be construed as bigoted, such as a tweet from November 2020 that suggested the Chinese eat dogs. “Dog make happy time soup! YOU WILL ENJOY!”

Its posts were written to sound as if they were penned by a non-English speaker. “Our website, receiving Approval-Stamp of incoming Biden-Regime, now been instated & now launch!” reads a Red Dawn News tweet from Nov. 9, 2020. In what appears to be his response to questions about Red Dawn News, Nelson wrote, “Go look at my family photo on my website, you racist.”

On Jan. 10, 2021, Nelson tweeted that “our account @reddawnnews1” has been suspended. Someone commented, “Q said when one goes down another takes their place…” Nelson liked the tweet.

QAnon followers have flocked to elections throughout the country. The conspiracy theory’s extremely political focus has its believers enthralled with politics and committed to remaking the government in their image. A few have already successfully parlayed QAnon into office.