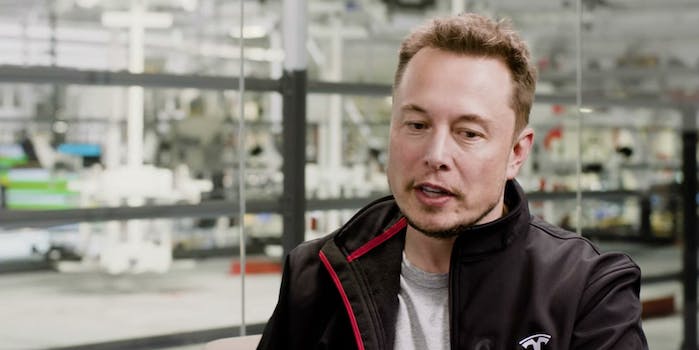 Tesla insiders claim things are a hot mess at the company

Tesla employees are having a rough time under their erratic CEO.

Elon Musk’s behavior of late has raised eyebrows from stockholders, electric vehicle orderers, the public, and current employees. One Tesla staffer reportedly told the New York Post that “It’s a shit show” at the company.

While Musk’s reputation and personality was initially an alluring draw for many employees, some staff members have reportedly grown disillusioned about Tesla’s ability to deliver on its promises. One anonymous source says that Musk bases company promises on what’s “physically possible rather than the practical reality.” Recent social media kerfuffles haven’t helped with that.

In a recent New York Times interview, Musk talked about his now infamous 420 tweet—which is getting him an investigation by the SEC—as well as disappointment over not being able to celebrate his birthday this year, and his future plans for the company. This past weekend, Musk was also embroiled in Instagram-based drama with rapper Azealia Banks. (Musk told Gizmodo that he had never talked to Banks before.)

On top of these troubles, a fire broke out at Tesla’s Fremont, California-based factory on Thursday evening.

Luckily, the fire did not reach its factory building and thus won’t impact production of Tesla vehicles. The source of the blaze was a nearby cardboard recycling area.

Musk tweeted that the situation was under control roughly an hour after first reports of the fire began.

I was just there. Cardboard being prepped for recycling along southern fence line caught fire. Super appreciate fast response by Fremont fire dept! No injuries or damage to factory.

The fire also didn’t seem to dampen Musk’s spirits, as he tweeted about adding an in-car karaoke feature to Tesla vehicles shortly after. (According to the Post, Musk sources a number of feature ideas like this from fans on Twitter.)

Despite recent snafus—and continued problems reaching production numbers—Musk has no plans to step down from his position, although he might be well advised to start getting a little more sleep.