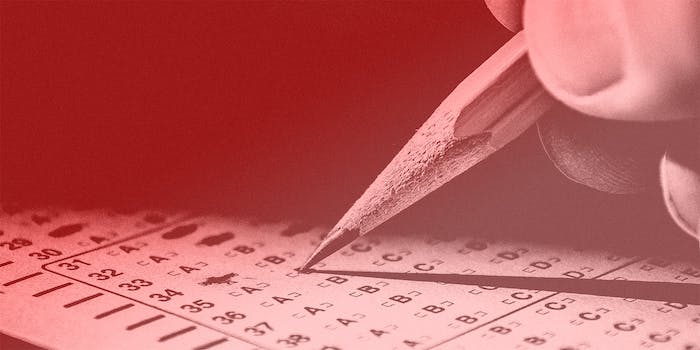 'If you are elected mayor, do not administer this racist, classist test.'

Late last week, New York City mayoral hopefuls participated in a forum held by Teens Take Charge. The youth-organized and -administered forum featured tough questions about subjects like racial justice, and moments of comedy, such as when the candidates were asked to dance the “Macarena.”

In one of the more serious segments, the teens took on a subject they know a lot about: standardized tests, specifically the Specialized High Schools Admissions Test (SHSAT), which New York gives eighth graders to help determine entry into elite high schools. They view the test as racist, classist and a poor indicator of aptitude and ability, criticisms that others have long echoed about standardized tests, which tend to perpetuate inequality.

To support their argument, they asked the candidates to answer a couple of actual questions from prior SHSATs.

“These questions will determine what school you go to, and in large part, your future socioeconomic status,” said the student playing the role of test proctor.

“If you do poorly on this one test on this one day, you will not be allowed into these schools that are overflowing with resources you may never have access to before,” he added ominously.

Few of the candidates correctly answered either question.

The proctor was unmoved.

“For those of you who got these questions right, congratulations, you are officially smarter and better than your peers. If you had a bad day and didn’t get some of the questions right, I don’t care and neither does the test.

“All this goes to show how ridiculous it is that we use one test to determine so much.”

The clip was posted to the Public Freakout subreddit, where it earned much praise for the students for “hardballing” the candidates, as well as criticisms of such tests.

“Screw the standardized testing system,” commented one redditor. “I royally screwed up my SATs and ACTs in high school because I crack so hard under pressure.”

“Guess how much GRE [Graduate Record Examinations] math I’ve used in grad school. Damn near zero and that is being generous,” another said.

“Powerful representation of the SHSAT exam during @TeensTakeCharge Mayoral Forum,” tweeted @FranzelKatie, who describes herself as a kindergarten teacher in her bio. “Candidates are not getting the answers correct on real questions from the test.”

“It’s clear no standardized test could capture the brilliance of these young leaders,” reflected @aliholstein.

The test proctor did not mince words at the end of the segment.

“If mayoral candidates cannot answer these questions correctly, why on earth should we put eighth graders through this twisted process that requires enormous amounts of test prep and clearly advantages those of more means?” he said.

“Moreover, why do we expect that these questions on these tests actually measure anything about a student? Why do we still use high-stakes testing when we know how flawed it is.

“Please let this SHSAT be the last SHSAT to ever be administered. If you are elected mayor, do not administer this racist, classist test.”