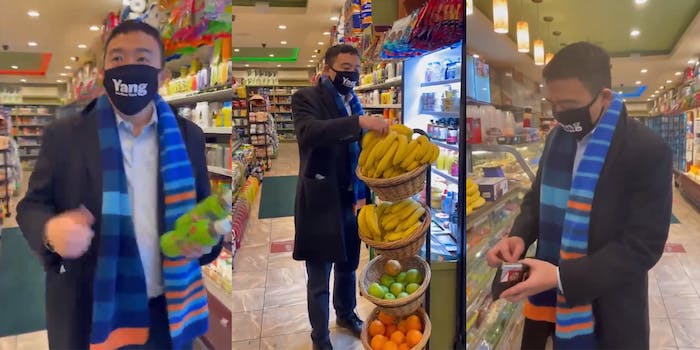 It seemed like we only just stopped talking about bodegas after online discourse threatened to tear parts of the internet apart last month. But thanks to Andrew Yang, the bodega discourse and memes have returned in full force.

Yang, who was among the presidential candidates vying for the Democratic nomination last year, officially entered New York City’s mayoral race earlier this week with a campaign video directed by Darren Aronofsky. On Friday, he made one of his first official campaign appearances at a local bodega to stress the importance of supporting the bodegas in the city.

In the video, Yang—who’s wearing a mask with his name on it—is shown grabbing a couple of bottles of green tea and attempts to break off a banana from the bushel, calling it the “breakfast of champions”; when he’s unable to break it off, he opts for the bushel instead.

“New York City relies on its 14,000 bodegas so much,” Yang explains as he readies to pay for his purchases at the counter. “I love bodegas and we gotta make sure they continue to stay open and do their thing.”

It’s the kind of political video that’s both dorky and corny. It’s practically harmless and has a simple message to support local businesses. Only, for many New Yorkers, there is one big problem with Yang’s video: That’s not a bodega.

Since announcing his run, Yang has already been criticized for not even living in New York City during the pandemic—he relocated to his home in New Paltz, New York with his family—and his comments on the difficulties of juggling his children’s virtual learning with his job in a two-bedroom apartment. (Many critics pointed out that it’s a common problem for New Yorkers during the pandemic, but unlike Yang, they don’t have the option to relocate to another home.) He’s also been criticized for having never voted in a New York City mayoral race. The latest snafu with bodegas feeds into the criticism that Yang is out-of-touch with New York.

There’s even a perfect comparison to Yang’s idea of a bodega that many made with Yang’s video. In one scene from The Office, Michael Scott arrives in New York early so he can visit his favorite New York pizza joint, proclaiming that “I’m gonna go get me a pizza slice” before heading to Sbarro, a national pizza chain.

And others had their own ideas of what Yang might’ve meant instead by a bodega.

Then again, there is the argument that any publicity is good publicity because by dunking on Yang for his misconceptions of a bodega, he’s getting a lot more attention than a lot of the other candidates.

The primaries for the New York City mayoral race are on June 22, 2021, and we’ve got a long way—and probably several more iterations of bodega discourse—to go.