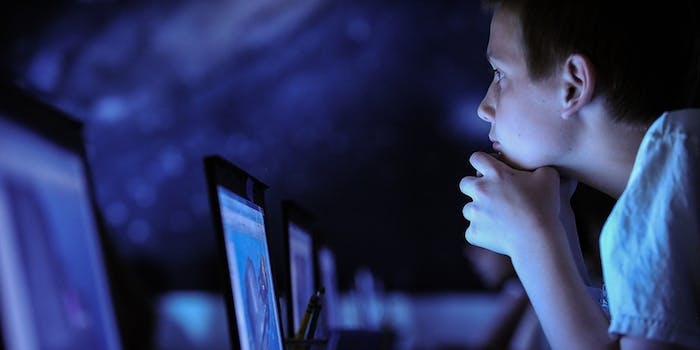 Technology will not save your children. It might help them, but it won’t save them.

In modern education, as is the case with pretty much everything today, the tendency is to take a stance that says technology is either our only solution or our biggest problem. But the truth is not so simple. Where the idea that technology was uniformly bad for children used to be a fairly common belief, more people are now starting to accept the possibility that technology does have legitimate educational benefits. However, iPads and increased Internet access aren’t going to solve everything.

The fundamental flaw in assuming that technology can drastically improve the woes of American education is this: The rich schools stay rich, and the poor schools stay poor. And not only do the poor schools have less access to technology, many of them don’t even have the ability to update the basics. This may be a digital world, but when it comes to curriculum and standardized testing, the approach remains mostly analog.

Meredith Broussard, a professor in data journalism at Temple University, recently looked at standardized testing in Philadelphia’s public schools. What she discovered was a system where the same companies who make the textbooks also issue the standardized tests. Meaning that if you can’t afford the former, students are less likely to succeed with the latter. She ultimately published her findings in The Atlantic.

“After six months of this, I discovered that the test can be gamed,” Broussard observed. “Not by using a beat-the-test strategy, but by a shockingly low-tech strategy: reading the textbook that contains the answers.”

Sounds like a remarkably simple solution—just read the textbook. But money talks, and if you can’t buy textbooks in the first place, how can you expect to give children the tools they need to succeed?

This all makes perfect sense, taking into consideration the litany of well-established problems in the American standardized testing system, the worst of which is likely racial bias. Noliwe M. Rooks, an associate professor at Cornell University, looked at the discrepancies for Time. “On K-12 achievement tests and college entrance exams, lower income students, as well as black and Latino students, consistently score below privileged white and Asian students,” Rooks argued,

A big problem needs a big solution, one that could come in the form of a technological revolution in the education system, but can high-tech testing fix America’s standardized test fiasco?

It’s unlikely, and it all boils down to money—not just in schools, but also at home. It goes without saying that if a child isn’t able to practice computer skills outside of the classroom, it’s unfair to expect them to pick those skills up as quickly. Last year, the Huffington Post’s Ronnie Reese explored this problem in Chicago. According to Reese, a parent told her, “With the computer-based tests … you have one child who can navigate the computer and use a mouse because they have a computer at home, and another student who has no computer at home and doesn’t know how to do these things.”

Big data plays a big part in this, too. You can’t go anywhere lately without hearing about the impact big data is having on the world, and the realm of education is no exception. Last year, in a piece exploring the possibilities that technology holds for American schools, the Economist declared:

Data derived from each child’s responses can be used to tailor what he sees or hears next on the computer screen. The same data also allow continual assessment of his abilities and shortcomings, letting schools, teachers and parents understand both the pupil himself and the way human beings learn. … This is in part because it is a special time for information technologies in general. The capacity, and mindset, to design systems that use and make sense of large amounts of data gathered on the fly is coming of age.

In other words, the more cold, hard data you have, the more you know. So as technology bolsters our ability to collect information, data is becoming king.

Except that all depends on the quality and reliability of the data you’re collecting. When Gary Marcus and Ernest Davis of the New York Times analyzed the faults of big data earlier this year, one of the problems they found was that “many tools that are based on big data can be easily gamed.” Marcus and Davis continued, “For example, big data programs for grading student essays often rely on measures like sentence length and word sophistication, which are found to correlate well with the scores given by human graders. But once students figure out how such a program works, they start writing long sentences and using obscure words, rather than learning how to actually formulate and write clear, coherent text.”

Finally, we return once more to the bottom line. As is the case with anything that relies heavily on technology, big data collection requires a lot of it. It requires machines and people to operate those machines, and without the necessary currency to facilitate that, the data that continues to come out of low-income area schools is going to be flawed or nonexistent. This was also paramount to the troubles that Broussard (a data professor herself, after all) found while looking at Philadelphia’s public school system.

“The Philadelphia schools don’t just have a textbook problem,” she wrote. “They have a data problem—which is actually a people problem. We tend to think of data as immutable truth. But we forget that data and data-collection systems are created by people. Flesh-and-blood humans need to count the books in a school and enter the numbers into a database. Usually, these humans are administrative assistants or teacher’s aides. But severe state funding cuts over the past several years have meant cutbacks in the school district’s administrative staff. Even the best data-collection system is useless if there are no people available to manage it.”

There is at least some comfort to be taken in President Obama’s plans to increase education funds in 2015. Sadly, there’s no way of guaranteeing that even with additional funding, the schools that really need it will be able to make the essential updates.

Technology and big data can only help our schools if we help them first. The education budget for many of America’s struggling areas is remarkably thin, and the mechanisms in place barely allow for any changes. As it is, teachers across the nation are using their own money to buy school supplies.

A few iPads in the classroom is fine, but when the system dictates that the only thing that matters is standardized testing, then the system has to either be changed or updated. Because right now, the data is flawed, and the tests are biased. And it’s going to take a lot more than Apple to change that.