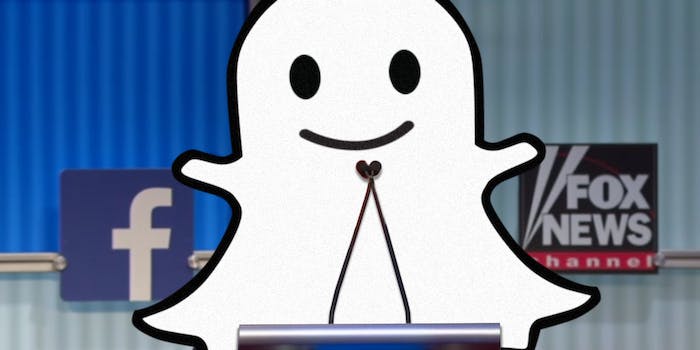 Most young adults watched the GOP debate on Snapchat, not TV

Almost twice as many 18- to 24-year-olds tuned into the GOP debate via Snapchat Live Story than TV, the company told Politico. The Live Story featured curated pictures and videos, or snaps, from before, during and after the first GOP debate in Cleveland, Ohio.

Snapchat editorial employees pick and choose what snaps from the debate go into the Live Story that is then presented to Snapchat users. While Snapchat hasn’t released specific numbers on how many times the story was watched, it’s likely the story in brought in huge numbers. Live Stories were receiving “tens of millions of views” earlier last year reported Gigaom.

Snapchat did not return our request for comment in time for publication.

Snapchat is increasingly becoming a social media tool used by candidates to attract young voters, particularly the 18-to-24-year-old demographic. Many candidates have created their own Snapchat accounts to give voters a glimpse of their campaign stops or to push policy issues.

There have already been presidential memes created from Snapchat Live Stories on the campaign trail. A snap of Hillary Clinton taking a video of herself and uttering the now famous words “Just chillin’ in Cedar Rapids!” while on the campaign trail in Iowa is now a popular meme.

Add us on Snapchat! @hillaryclinton 👻 pic.twitter.com/ZpfETuFgDM

Rand Paul just posted this to his Snapchat. pic.twitter.com/vodBoU8x19

The GOP debate Live Story ran ads in between user-submitted clips, something that is quickly becoming a massive revenue source for Snapchat. As this election cycle heats up, expect a 2016 turf war for Snapchat ad space similar to what we’ve seen with TV and radio in years past.