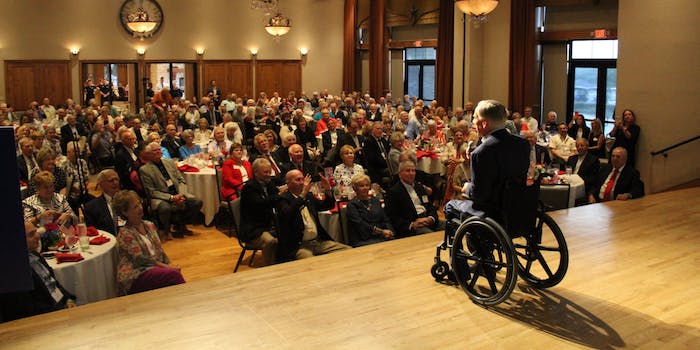 Social media was quick to point out the governor's constant downplaying of the pandemic.

In a tweet on Tuesday, Abbott’s office announced that the governor would place himself in isolation while recovering from the virus.

“The Governor has been testing daily, and today was the first positive test result,” a statement reads. “Governor Abbott is in constant communication with his staff, agency heads, and government officials to ensure that state government continues to operate smoothly and efficiently.”

“Governor Abbott is fully vaccinated against COVID-19, in good health, and currently experiencing no symptoms,” the statement adds. “Everyone that the Governor has been in close contact with today has been notified. Texas First Lady Cecilia Abbott tested negative.”

News of Abbott’s positive test was immediately met with criticism on Twitter from users who accused the governor of downplaying the virus.

Much of the attention was placed on a tweet from the official Texans for Abbott account that showed the governor attending a maskless meeting at the Republican Club at Heritage Ranch just 24 hours prior. While it’s unlikely the governor caught the virus there, it’s indicative of his lax approach to the pandemic in general, to say nothing of people he could have infected there while unaware he was sick.

Numerous tweets from the account showed the governor mingling with the crowd. It remains unclear if the event required proof of vaccination to attend.

The term “Governor’s mansion” also began trending as users compared Abbott’s medical treatment to those of regular citizens who have tested positive for the virus.

“According to the statement from his office he is resting at the Governor’s mansion and receiving monoclonal antibodies. All while his hospitals run out of room,” @Murraykeen said. “It’s good to be the king.”

Abbott has received pushback from critics over his decisions regarding the pandemic, specifically his opposition to mask mandates in public schools.

The positive test comes as more than 115,000 patients remain hospitalized in the state as of Monday. Positive tests continue to rise in Texas due to the highly contagious delta variant.