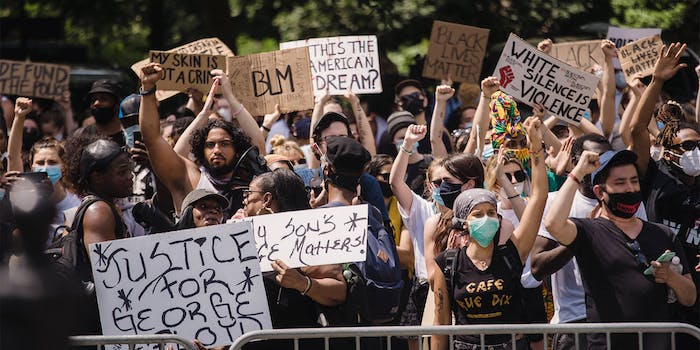 The groups are calling for 'dramatic changes' for surveillance and the militarization of police.

A coalition of more than 100 civil liberties and civil rights groups are calling on members of Congress to cease federal funding for surveillance technology that is being used on protests against racism and police brutality across the country.

The groups include a number of prominent organizations including the ACLU, the Center for Democracy & Technology, Color of Change, the Electronic Frontier Foundation, Fight for the Future, Free Press, MediaJustice, the National Hispanic Media Coalition, RAICES, the Surveillance and Technology Oversight Project, and more.

In their letter, the groups specifically call on House Speaker Nancy Pelosi (D-Calif.), Minority Leader Kevin McCarthy (R-Calif.), Rep. Jerrold Nadler (D-N.Y.), and Rep. Jim Jordan (R-Ohio) to “address the unconstitutional and dangerous use of surveillance by state, local, and federal police officers against demonstrators protesting the murder of George Floyd and so many others perpetuated by systemic police brutality.”

The groups cite instances of Customs and Border Protection (CBP) drones flying over areas where protests were held, and the Department of Justice allowing the Drug Enforcement Agency (DEA) to conduct “covert intelligence.”

The situation has made it “abundantly clear” that “dramatic changes” to surveillance and the militarization of police are needed, the letter reads.

Specifically, the groups called on the members of Congress to stop state and local grants allowing for police departments to purchase surveillance technology, stop federal funds from being used for mass unwarranted surveillance, and stop CBP and DEA from using intelligence assets for general policing and surveilling protests.

“Protesters are in the streets fighting for the lives of Black people and racial justice in the face of a deadly pandemic that is ravaging our most over-policed communities,” the letter reads. “Meanwhile, the actions of police are undeniably escalating under a Commander-in-Chief tweeting out calls to get tough and shoot ‘looters.’ It is time for Congress to respond with bold plans to protect Black people in America.”

Earlier this month, 35 members of the House of Representatives called on the FBI, DEA, CBP, and National Guard Bureau to stop surveillance of protests.