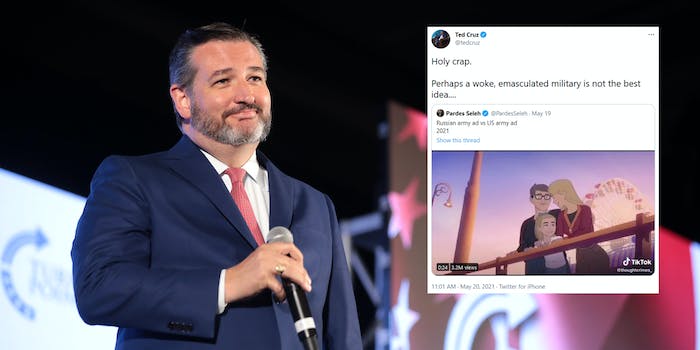 Sen. Ted Cruz (R-Texas) is facing a heap of criticism after he criticized a U.S. military ad as being “woke” and “emasculated.”

Cruz, who people online were quick to point out supported former President Donald Trump after he badmouthed his wife, tweeted out a TikTok video that compared a Russian army ad to one made by the U.S. military.

The Russian ad looks like a Call of Duty game, with muscular men standing at attention in lines and jumping out of airplanes. Essentially, it is garden-variety military propaganda.

The U.S. ad is an animated story of a female service member highlighting being raised by two moms and attending rallies to promote equality, or as she describes it: “defending freedom from an early age.”

The service member ends the ad by saying “After meeting with an Army recruiter I found … a way to prove my inner strength.” The U.S. ad is one of several animated ads released by the Army recently.

While the U.S. military said the ads were meant to show “how five young Americans made the most important decision of their lives, for reasons as diverse as they are,” Cruz thought they were something different.

To Cruz, the U.S. military ads were “woke” (a favorite Republican talking point these days) and showed an “emasculated military.”

“Holy crap. Perhaps a woke, emasculated military is not the best idea….” Cruz tweeted on Thursday.

Cruz’s comments were quickly bashed online, with people pointing out that perhaps he shouldn’t be talking about people being “emasculated,” considering how he supported Trump even after the former president attacked how his wife looked.

Others, like Sen. Tammy Duckworth (D-Ill.), pointed out that Cruz was sharing Russian propaganda.

“Holy crap. Perhaps a U.S. Senator shouldn’t suggest that the Russian military is better than the American military that protected him from an insurrection he helped foment?,” Duckworth, who served in the Army National Guard, tweeted.

Cruz eventually responded to the wave of criticism, saying that “lefty blue checkmarks” were “losing their minds” over his initial tweet. The Texas senator said he was not “attacking the military” but instead thought that “Dem politicians & woke media are trying to turn them into pansies.”