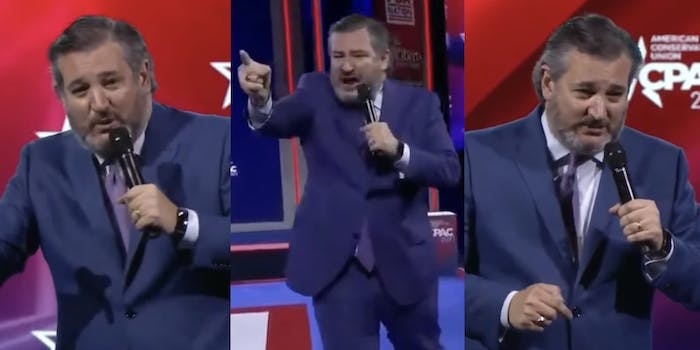 'Was he screaming like that all the way to Cancun?'

A clip of Sen. Ted Cruz (R-Texas) screaming “freedom” at the top of his lungs is spreading across the internet like wildfire.

The clip comes from Cruz’s aggressive speech given at the Conservative Political Action Conference (CPAC) on Friday. He riled up the crowd by attacking President Joe Biden’s “radical” administration.

But he ended his speech by screaming “FREEDOM” and the internet could not help but begin cracking jokes and memes.

Cruz was quoting a scene from the movie Braveheart where actor Mel Gibson plays medieval Scottish patriot William Wallace. Gibson yells “freedom” to his soldiers before running into battle.

“In the immortal words of William Wallace, ‘freedom!'” Cruz said.

Many people are noting the irony in Cruz’s quote as many blame Cruz for inciting the riots at the Capitol on Jan. 6.

“When you inspire an insurrection on your workplace,” one person tweeted.

Meanwhile, others used the clip to joke about Cruz’s latest misstep: when he he was photographed leaving the country during a weather emergency in Texas.

“When you’re running away from a crisis, take your seat on your flight to Mexico and hear the gate has closed,” Onion contributor Maura Quint tweeted, linking to Cruz screaming “FREEDOM.”

Other Twitter users also chimed in, mentioning his trip to Cancun.

“This was also Heidi Cruz’s reaction after Ted left Cancun,” one person posted.

Millions of Texans were out of power when Cruz tried to escape to Mexico. After the internet found out, he immediately returned to the U.S.

Cruz even joked about the Cancun incident in his CPAC performance.

But besides Cancun, other people online quickly jumped on in mocking Cruz’s guttural “FREEDOM” yell.

“Ted Cruz is the worst WWE jobber ever,” another person said.

The audience at CPAC, however, loved Cruz’s enthusiasm as they stood and applauded the Senator.