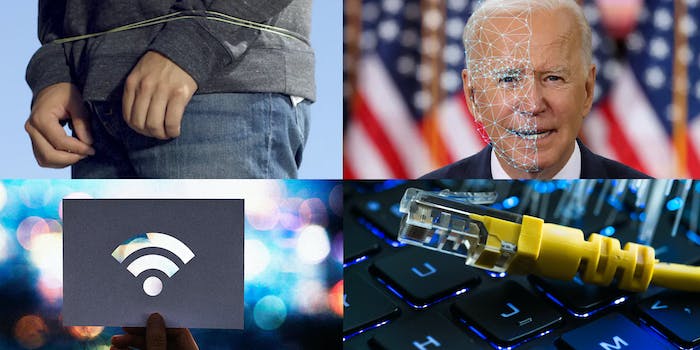 Police departments provided body camera footage and testimonials to WRAP, the company that makes the controversial BolaWrap, a high-tech lasso, which are then used to sell it to other agencies.

According to emails obtained with public records requests by the Daily Dot between WRAP and law enforcement agencies, departments readily provided the company with body camera footage of officers deploying the BolaWrap, a device that propels a Kevlar lasso with prongs that wraps around the body of an individual to stop them.

WRAP used these edited versions of these videos to market the BolaWrap. Some of the videos have also appeared in media coverage of the device, including on Fox Business News.

In some instances, departments were also offered a free device after submitting footage.

The BolaWrap has been controversial, being lauded by some as a tool to make policing safer, but also drawn criticism because it is marketed as a tool to subdue individuals with mental health issues. Many of the WRAP’s videos show real deployments of the BolaWrap being used to immobilize someone in the middle of a mental health crisis.

WRAP requests information about any deployments of the BolaWrap in follow-up emails to officers after demonstrations and trainings, based on interviews, email exchanges with departments, and forms reviewed by the Daily Dot. Police departments are more than happy to comply.

“We encourage police departments to share bodycam footage of BolaWrap deployments so the company and other law enforcement agencies can learn from those,” WRAP said in a statement to the Daily Dot. “When we release a bodycam video, the subject’s face is always blurred.”

WRAP did not specifically respond to numerous detailed questions to the Daily Dot, like why they provided police departments with free wraps.

Read all of our report on the relationship between BolaWrap and police here.

Hosting websites can claim to offer the best web experience for small businesses, bloggers, and artists–but when they all say that, speculation starts to take hold. If you don’t have time to sift through hundreds of monotonous reviews, we get it (it kinda sucks). Behold your cheat sheet below: our guide to the best hosting sites.

The findings of a recent report by the Government Accountability Office (GAO) regarding the federal government’s use of facial recognition are renewing calls for President Joe Biden to ban the technology.

The GAO’s report found that 20 federal agencies either owned or used facial recognition technology. It also found that six agencies had used it amid Black Lives Matter protests against police brutality and racism in 2020.

The report also noted that there was a lack of oversight from the agencies about how employees were using facial recognition. The GAO said 13 agencies reported to them that they didn’t know what non-federal facial recognition systems were being used by employees.

Facial recognition technology has been found to have a racial bias, and there has long been a push to ban itfrom being used by the government and police. In the absence of movement at the federal level, cities and states have moved to place restrictions on the technology’s use.

Now, the report’s findings are renewing previous calls civil rights and tech advocacy groups have made to Biden to ban the federal government from using facial recognition.

“It’s alarming that six federal agencies targeted facial recognition at BLM protesters. In a democracy, police should not be allowed to use surveillance to punish dissent,” Albert Fox Cahn, the executive director of the Surveillance Technology Oversight Project, said in a statement.

“While the GAO’s findings are alarming, their recommendations don’t go far enough. We don’t need facial recognition regulations, we need a full ban. We can’t wait for Congress to act, so we are calling on President Biden to issue a moratorium on federal facial recognition,” Cahn added.

An attempt by Ohio Republicans to insert an amendment into a budget that would have effectively killed municipal broadband in the state has reportedly been nixed.

State legislators removed an amendment that would have affected current networks and drastically limited city and towns’ ability to create new municipal broadband networks from the final version of their state budget proposal.

The municipal broadband-killing amendment had caused an uproar among local citizens and officials, who called for the Republican-authored amendment to be removed.

On the national level, there has been a recent push to increase broadband access. President Joe Biden’s broadband component of his infrastructure package has highlighted municipal broadband. However, Republicans in Congress have also tried to push against municipal broadband efforts.