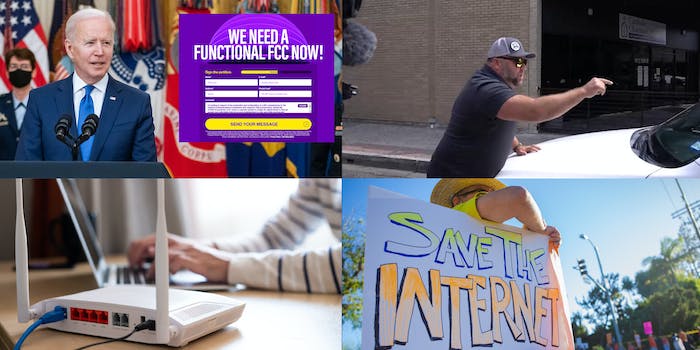 Tech newsletter: Will Biden pick an FCC chair with no telecom ties?

More than 100,000 people have joined a push by numerous advocacy organizations urging President Joe Biden to fill out the Federal Communications Commission (FCC) with someone who does not have ties to the telecom industry and would support reinstating net neutrality rules.

Last month, a coalition of more than 20 public interest and tech advocacy groups relaunched the Battle for the Net website, which has long been used in the past as a hub for net neutrality advocacy.

As of last week, the groups said more than 100,000 people have signed onto their petition and hundreds of tweets have been sent in support of the effort.

The FCC is currently deadlocked in a 2-2 partisan tie, with Biden having the ability to nominate a fifth commissioner who, once confirmed by the Senate, would give Democrats a majority at the agency. That majority would allow it to vote on what are likely partisan issues, like restoring net neutrality under Title II of the Communications Act.

Biden has faced increased pressure to nominate the fifth commissioner from advocacy groups and tech companies, but now, according to the advocacy groups, that pressure is also coming from more than 100,000 people online.

“Recent years have shown the public is prepared to engage in massive online activism to ensure a free and open internet. Activists are watching and have made clear they expect a public-interest minded nominee to the FCC,” Mark Stanley, director of operations at Demand Progress, said in a statement. “We urge the Biden administration to listen to these voices and quickly nominate a commissioner who will help restore Title II open internet protections and ensure affordable high-speed internet access for all.”

If your kids lose their masks all the time, this subscription will save your sanity

Keeping a mask on your kids’ faces is about as easy as teaching a cat to fetch. But if you stock disposable masks you don’t have to lose it when their cloth masks vanish for the 57th time. Armbrust’s child-sized mask subscription will keep your household stocked and save you 30% off the cost at the same time. And with blue, pink, and orange to choose from, you can be sure they’ll never be bored with this now-crucial daily accessory.

Alex Jones’ latest video shows the extreme lengths he’ll go to to ensure that every immigrant child is properly buckled into their car seat.

The video shows Jones, Drew Hernandez, and their camera crew confronting a man loading children and a woman identified as their mother into a van in South Texas.

Shouting and screaming, they shove cameras in their faces and accuse the man of smuggling and trafficking the kids. They also try to get him to reveal where he’s taking the children, which isn’t creepy at all.

Like true traffic safety vigilantes, Jones and Hernandez absolutely lose their minds over the lack of seatbelts in the vehicle.

According to a clearly visible sign on the building, they’re outside Catholic Charities, which, among other things, provides clothing, relocation services, and other humanitarian relief to people seeking to immigrate to the United States.

In a statement, the charity categorically denied everything Jones said in the video, noting they were not smuggling children.

The requirement is part of New York’s fiscal year budget plan. Specifically, the $15-a-month plan will be for internet with 25 megabits per second (Mbps) download speeds and 10 Mbps upload speeds. New York will also allow for ISPs to offer 200 Mbps service for no more than $20.

The plan will be available for New Yorkers who meet certain eligibility requirements, including being eligible for SNAP, Medicaid, and other programs. ISPs with more than 20,000 customers in the state—such as Verizon—would need to offer the $15-a-month plan.

Greg Guice, the government affairs director at tech advocacy group Public Knowledge called it a “substantial step forward.” Guice said that while the $15 per month plan is “fairly limited in terms of speed,” he noted that New Yorkers could also get more robust service for $20.

“New York’s new law marks a substantial step forward in addressing the challenge of broadband affordability that so many families around the country are confronting,” Guice told the Daily Dot.