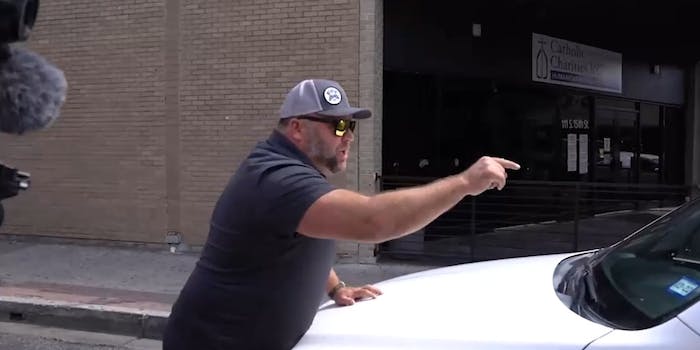 He won't rest until every child is safely buckled in.

Alex Jones’ latest video shows the extreme lengths he’ll go to to ensure that every immigrant child is properly buckled into their car seat.

The video shows Jones, Drew Hernandez, and their camera crew confronting a man loading children and a woman identified as their mother into a van in South Texas.

Shouting and screaming, they shove cameras in their faces and accuse the man of smuggling and trafficking the kids. They also try to get him to reveal where he’s taking the children, which isn’t creepy at all.

At one point, Jones stands in front of the vehicle, preventing them from driving away.

Like true traffic safety vigilantes, Jones and Hernandez absolutely lose their minds over the lack of seatbelts in the vehicle.

“We need the police over here, they have a bunch of kids without a car seat,” Jones shouts.

“No car seats. What organization is this? I want to know who the hell this is,” Hernandez, who calls himself an investigative reporter, bellows later. “What kind of a Catholic organization is this? Jesus stuffs people in the back of a car? You should be ashamed of yourselves, every single one of you.”

According to a clearly visible sign on the building, they’re outside Catholic Charities, which, among other things, provides clothing, relocation services, and other humanitarian relief to people seeking to immigrate to the United States.

In a statement, the charity categorically denied everything Jones said in the video, noting they were not smuggling children.

The video, they said, is a “contrived misrepresentation of the work of Catholic Charities of the Rio Grande Valley. The video clip is a staged confrontation interrupting the goodwill of someone providing assistance in the form of transportation for three mothers and their children to the Humanitarian Respite Center. Ideally, the children should have been wearing seatbelts; unfortunately, this was not the case in this instance. The Humanitarian Respite Center and Catholic Charities of the Rio Grande Valley are not involved in any human smuggling or trafficking networks.”

But Jones’ and Hernandez’s hysteria increases dramatically when police arrive.

“If I drove around with three of my kids in the back of the car, I’d get arrested,” Jones screams. Failing to properly restrain children in a vehicle is a non-criminal offense in Texas.

After conferring with the driver and the children’s mother, the group exits the vehicle. As they head inside, an officer pats one of the young boys on the head in an apparent gesture of sympathy.

All the while, Jones and Hernandez continue filming the group and ranting for the benefit of the cameras.

Never one to let the truth get in his way, Jones has chosen to frame the incident as him stopping “smugglers from illegally transporting children at the border.”

There is no evidence that the van’s driver, who wears a shirt identifying him as staff, is smuggling anyone. Nor is any concrete proof given that the group are undocumented immigrants. Though they did not explain it, in their statement, Catholic Charities hinted they were asylum seekers.

The McAllen Police, who showed up on the scene, did not respond to a request for comment.

Hernandez posted a similarly hysterical video on Twitter. “This has gone too far,” the wannabe traffic cop tweeted.

Right-wing media with similar commitments to the truth have heralded the pair’s heroics.

“Alex Jones has once again done what few others would be brave enough to do,” the Gateway Pundit crowed, claiming Jones had halted child smugglers in their tracks.

National File uncritically wrote of Jones “tracking” the group from an immigrant housing site, which Jones wildly deems a “human trafficking facility,” to a COVID-19 testing facility that looked “fraudulent” (whatever that means) to Catholic Charities.

On Twitter, others praised Jones for standing up to non-existent traffickers.

It does not appear Jones “rescued” them in any way though.