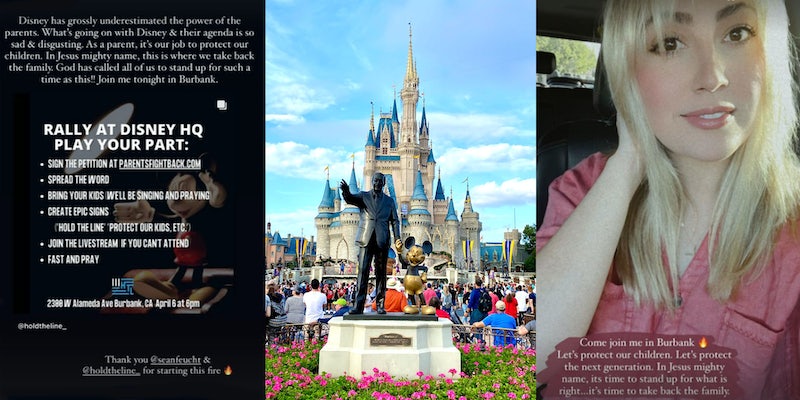 ‘This might have ruined my favorite movie’: Lavagirl actress protests Disney over opposition to ‘Don’t Say Gay’ law

Taylor Dooley, the actress who played Lavagirl in beloved kids’ movie The Adventures of Sharkboy and Lavagirl, protested Disney yesterday over the company’s opposition to a controversial Florida law critics have dubbed “Don’t Say Gay.”

The law regulates classroom discussion of LGBTQ issues, banning them entirely for kindergarten to third grade, and demands that they are “age appropriate” for all the other grades. The bill also gives parents the right to sue the school district if they believe it violated the law.

Critics believe that the law marginalizes and stigmatizes LGBTQ students, teachers, and those with LGBTQ family members. They dubbed it “Don’t Say Gay,” arguing that its language is so broad that it potentially bars mentioning same-sex or transgender parents and family members in the classroom, and that it’s a solution for a problem that doesn’t exist.

The law’s supporters, including the protest at Disneyland Dooley joined on Wednesday, say it protects parents’ rights to control their children’s education and prevents indoctrination in schools. They’ve also controversially claimed that it prohibits “grooming,” a homophobic and false claim that LGBTQ people are pedophiles.

Dooley herself echoed such claims. In an Instagram story, Dooley included a screenshot of protest organizer Sean Feucht’s post claiming, “The sexualization and indoctrination of 4-year-old children SHOULD BE a line in the sand for every sane person.”

Dooley didn’t respond to questions about the protest and the Florida law sent via email on Thursday morning.

Disney recently found itself at the center of controversy over the law. It’s considered among the most affirming corporations for LGBTQ employees. In 2019, it received a perfect score for LGBTQ workplace equality.

The company initially took what some viewed as a neutral stance on the law. Under pressure from fans and employees who wanted Disney to more definitively oppose the law, the company apologized, publicly decried the legislation, and paused political donations in Florida.

Sean Feucht, a Christian musician and former pastor, organized a protest of Disney’s opposition to the Florida law. In an appearance on Fox News, Feucht characterized Disney’s stance as enabling “those who want to fight to sexualize our kids.”

In an Instagram story on her verified account, Dooley urged people to join her there. “It’s time to take back the family,” she wrote.

On Wednesday, she posted multiple stories from the protest.

Some of her fans are disappointed over the actress’s stance.

“Why does my childhood have to be ruined by this crazy?” @JacobWolf responded to Dickson’s tweet.

Another said, “I’ll never be able to watch [The Adventures of] Sharkboy and Lavagirl the same way.

“This might have ruined my favorite movie for me,” another added.