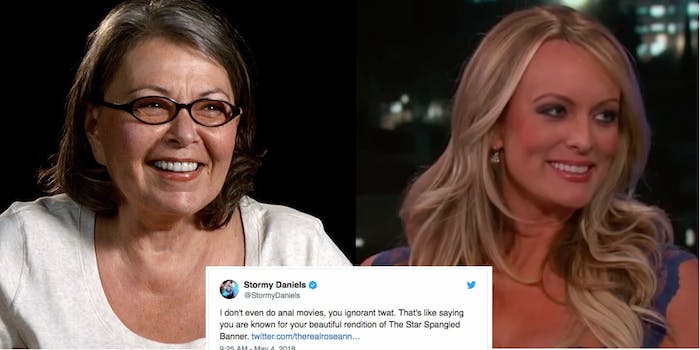 It's just another Friday in America.

[Stares longingly at crimson-breasted northern cardinal chirping gaily while perched in a just-blooming tree outside my window, wishing I was anywhere but typing that last sentence.]

It all started, as most Twitter fights do, when someone did a tweet. In this instance, it was Daniels, who is suing the president for a variety of things, all involving an affair they reportedly had a dozen years ago. The tweet, though, was not related to the affair or Trump.

It was about drinking coffee.

Have you seen my tits? (Of course, you have) I don't jog anywhere. So I'll just sit here, sipping my coffee and talking shit. Xoxo https://t.co/fnsJ5SVcO2

How did drinking coffee progress to butt sex and Francis Scott Key’s American opus? Because Patricia Arquette (????) responded to talk about class after a woman said Daniels doesn’t speak for her.

Following this logic -If she doesn’t represent “classy women” I guess that means the President represents classless men? Hmm. Interesting. ..

(If you didn’t get that insult, Roseanne once horribly botched the national anthem. Talk about a clapback callback.)

Stormy had an answer for that.

Anyways, this is a long-winded way of saying I wish I was a bird.