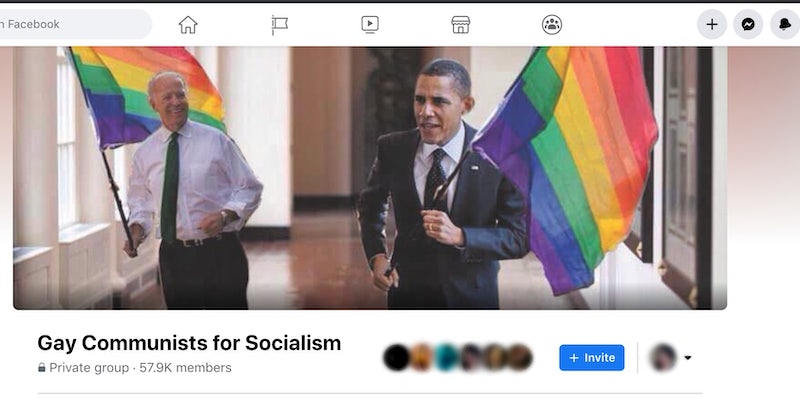 They are now furiously departing it.

A Facebook group that overnight attracted tens of thousands of people, many of whom are President Donald Trump supporters, has now been renamed to something that’s probably every Trump supporter’s nightmare: “Gay Communists for Socialism.”

The group, initially titled “Stop the Steal,” was similar to one that Facebook shut down on Thursday because it called for real-world violence. Trump supporters across the country have been rallying for mail-in ballots to not be counted. Their demand hinges on the premise that these ballots are stealing the presidency from him.

This group had 64,000 members on Friday morning, which was rapidly decreasing by the hour. At the time of publication, the number of members had dropped to 56,800 members.

People who joined the group thinking they would find a community of Trump supporters posting angry messages about the elections are now freaking out about having affiliations with homosexuality, communism, and socialism.

Given the demographic of the people who were initially attracted to the group, there were homophobic comments.

Some were worried that they’d already invited friends to the group and how they might appear in front of these friends. Others in the group did not miss the opportunity to take a dig at that.

It’s not clear if the group was created by admins with this agenda or someone hacked into the group to create it. The group was only created on Thursday and renamed by Friday.

The admin members of the group did not respond to the Daily Dot’s request for queries on Friday. While there’s no way to be sure about either the agenda of the admins or the process in which the renaming occurred, the Facebook profile of the admins have no implication that they’re Trump supporters and/or that they have any affiliation to other “stop the steal” protesters.

Some in the group considered that this could’ve been a “set up.”

Overall, it truly depicts the lack of Trump supporters’ understanding of how Facebook groups and activities operate. It can be extremely easy to change admin settings of some of these groups, and liberals infiltrating far-right group is not uncommon.

And they’re probably going to get trolled again.