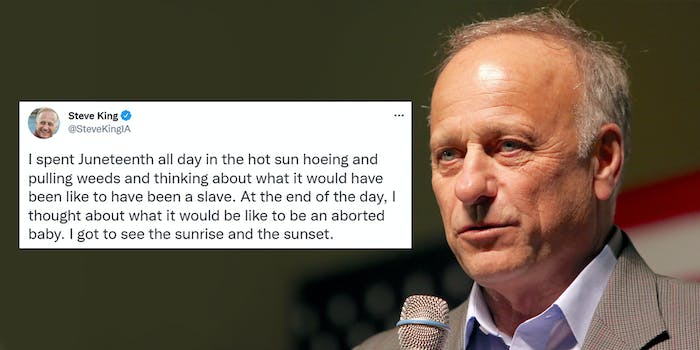 Man what is wrong with you’: Former GOP congressman says it’s better to be a slave than aborted because you get some nice sunsets

Steve King has a lengthy history of making bigoted and racist remarks. The former Republican congressman from Iowa added to that record on Tuesday when he shared his thoughts about Juneteenth and reproductive rights.

King equated a day of yard work to slavery to conclude that he’d rather be a slave than aborted.

It seems likely King intended to bait people into trolling him by sharing a sentiment that most would find deeply offensive. Even someone who once defended white supremacy should be aware that a single day of working in the yard in no way compares to slavery.

The tweet appears timed to coincide with two major events.

Monday marked the first time the United States recognized Juneteenth as a federal holiday. Juneteenth is the anniversary of the day slaves in Galveston, Texas learned of their emancipation.

King’s comments also came on the day when many had expected the United States Supreme Court to overturn Roe v. Wade, which granted reproductive freedom in America. The court didn’t announce its decision in that case.

Negative feedback rolled in the moment King hit the publish button. Many called him racist.

Although King is notorious for making prejudiced comments, many found the cruelty of this particular sentiment unsettling.

“Man what’s wrong with you,” one wrote.

Some suggested that King’s tweet is indicative of the direction Republican politics has taken in recent years.

“I remember when this white supremacist used to be among the worst of Republicans, perhaps the worst. Now he’s just run of the mill,” commented @TUSK81.

Most people just trolled him.

“I see Steve has gotten worse since he left office,” wrote one.