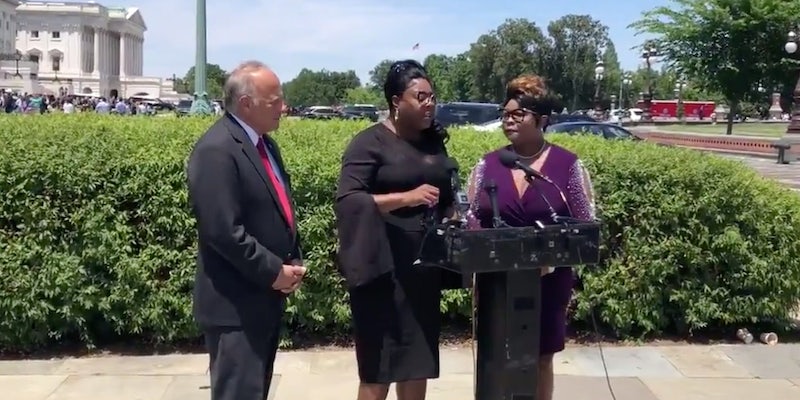 Steve King's committee assignments are back to 'TBD.'

The change came after The Daily Dot asked King why the assignments are still listed on his website and if he is lying to his constituents.

The updated website reads “TBD” under the committee assignments section.

And here’s what it looked like on Wednesday morning, before we asked King about it:

The change was the result of an off-the-rails press conference just outside Capitol Hill that King put on with YouTube stars-turned-Fox personalities, Diamond and Silk. The duo, who are known for yelling about various left-wing plots into cameras were there to help King introduce a bill in their namesake; the Diamond and Silk Act.

The press conference was held on the House Triangle, a small section of concrete where lawmakers routinely hold events to introduce bills that they’re particularly proud of. It began as most of these press conferences do, with King explaining what the bill will accomplish.

Essentially, it will take federal money away from sanctuary cities, which are places that offer protection to undocumented immigrants, and deliver that funding to programs helping the homeless.

King said that Diamond and Silk got involved “because we came together in some pretty interesting conversations. And when we started putting our ideas together, I found that Diamond and Silk are even stronger on this than I was advocating,” he added, “so we wrote the bill and it came out of our discussions.” He called it “a deeply thought-out bill.”

When Diamond and Silk were given the podium, they delivered a toned-back version of their usual routine. The taller of the two, Diamond, delivers their points while Silk stands (or sits) off to the side and nods along with the occasional uh-huh and that’s right.

But the calm evaporated soon after Steve King and his guests began taking questions from the press. A reporter immediately asked about King’s history of parroting white supremacists and loss of his committee assignments. In an almost choreographed move, King faded behind Diamond and Silk, who laid into the reporter, shouting “this is ain’t about Steve King, this is about our homeless.”

That set off what became about fifteen minutes of Diamond and Silk yelling at the press while King lingered behind them, offering occasional weak answers. When asked what they thought of King retweeting white supremacists, the duo shot back “what is the definition of white supremacy? What is your definition of that? You don’t know do you?”

Moments later, they asked: “why would you ask me that question if you don’t know?” As a reporter began to answer, Diamond shouted over him, “it’s time to start working for Americans and stop calling everybody a racist.”

King has an extensive history of echoing typical white supremacist talking points. He’s tweeted: “We can’t restore our civilization with somebody else’s babies,” and “diversity is not our strength.” In an interview with the New York Times, he said he doesn’t understand why the terms “white nationalist” and “white supremacist” are offensive.

That remark led to him being thrown off his committee assignments. Despite his loss of committee assignments, King’s website still listed him as sitting on those committees. When the Daily Dot brought that up and asked if King is lying to his constituents, he responded: “I’m misquoted in the New York Times.”

When someone responded that Joe Biden “is not holding a press conference,” that got a few chuckles from the gathered reporters, but infuriated Diamond and Silk. They shouted “he’s running for President of the United States, so you all, you call our president racist, you want to make [King] act like he’s racist but I hear a man that echoes sentiments of racism and bigotry right there on the floor and you all… silent about that.”

While Diamond and Silk were chewing out the press, King’s communications director said, falsely, that his committee assignments aren’t on his website. And King, exasperated, called on a friendly reporter from One America News — a Trump-adoring network that pushed the Seth Rich conspiracy theory and where Pizzagater Jack Posobiec works as a reporter.

When the Daily Dor showed the staffer, he seemed perplexed saying, “I don’t know how that’s coming up, so I’ll take a look at it. We used to have a section of the website in the “about section” which was all the committee assignments and everything and we had the web vendors take all of that out.”

Finally, after about fifteen minutes, King ended the press conference. He and Diamond and Silk walked off to the side where they did an interview with One America News (but took no additional questions from the press) before climbing into a sedan and driving off.

If Diamond and Silk actually hope to get their bill passed, they could not have picked a worse member of Congress to put their names beside.

Steve King is a joke of a lawmaker; in 2018 as he was running for re-election, his home paper—the Des Moines Register—noted that in his fifteen years in Congress, King passed exactly one bill as the primary sponsor.

But, then again, this bill was probably about nothing more than the opportunity to shout at the press. And if nothing else, Steve King’s website is now accurate.