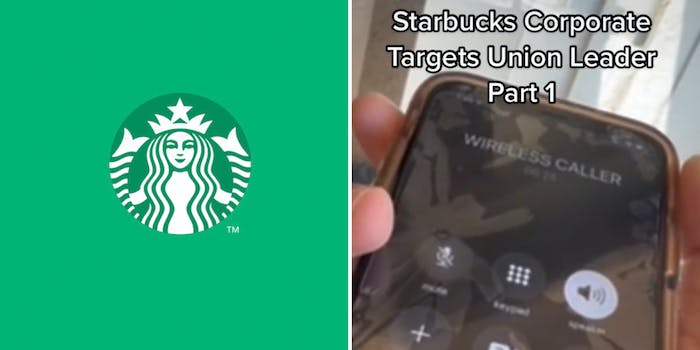 ‘HR is never on your side. Never!’

Starbucks corporate is facing a reckoning as accusations of wrongful persecution of pro-union employees come forward. This week, viral TikToks feature footage of a now-fired union organizer being reprimanded for various minor infractions on the job.

One viral video, which has over 1 million views, was posted this week by the progressive non-profit media organization More Perfect Union (@moreperfectunion) on TikTok. The video shows an alleged Starbucks union organizer receiving a phone call from a corporate representative accusing her of misconduct.

“Have you ever made a joke saying, ‘You can’t say that—that’s racist’ about something you knew wasn’t racist?” the alleged corporate representative asks on the phone.

“Uh, I don’t really understand,” the union organizer responds in the video. “I think I want to talk to a lawyer, ‘cuz I don’t really like where these questions are going to. I don’t like it, and I kind of feel attacked.”

Union organizers are part of a push that has recently unionized 10 Starbucks locations and led over 160 locations to file for union elections since December, according to Vox.

Laila Dalton—who has confirmed on Twitter that she is the employee in the TikTok videos posted by More Perfect Union—is a union leader in Phoenix who was fired from Starbucks this week. A Starbucks spokesperson told the Independent that Dalton was “written up numerous times for behavior that is not reflective of the company’s mission and values,” and they pointed specifically to Dalton’s recordings of conversations between herself and management. The spokesperson reportedly called the recordings illegal because Dalton did not get permission from management.

Recording conversations is legal in the state of Arizona as long as one person in the conversation consents, according to the Reporters Committee for Freedom of the Press.

In another video, Dalton is seemingly brought to tears after another corporate representative reprimands her for wearing AirPods while working.

“It kind of really hurts. Because I really have been discriminated against by my store’s manager and district manager. I totally feel set up right now,” Dalton says in the video.

“Courageous workers like Laila know they’re being wrongfully targeted for being pro-union, and her great instincts to record the ambushes by her boss will undoubtedly resonate with so many workers who feel like they don’t have basic dignity and respect on the job,” Faiz Shakir, More Perfect Union’s executive director, told the Daily Dot in a statement.

This week, the National Labor Relations Board issued a complaint against Starbucks for allegedly wrongfully targeting and firing two Arizona employees involved in unionization efforts, including Dalton. The Starbucks union, Workers United, has also pursued charges of the alleged wrongful targeting of over 20 union organizers, according to the New York Times.

TikTok users are furious over the videos posted by More Perfect Union.

“Corporate will do anything to antagonize union organizers to make sure no one unionizes,” one user commented.

“HR is never on your side. Never!” another wrote.

“So when is Starbucks going to face consequences for union busting?” a third asked.

The Daily Dot reached out to Laila Dalton, Starbucks, the National Labor Relations Board, and Starbucks Workers United for comment via email.

Update 12:15pm CT. April 8, 2022: Starbucks Workers United responded to the Daily Dot’s request for comment after the publication of this article by connecting us with Bill Whitmire, a shift supervisor who has worked with Dalton to union organize at the Scottsdale & Mayo Starbucks location in Phoenix.

Whitmire said that in December, many complaints started to arise at their location about scheduling and short-staffing. He said many employees were college students who worked at Starbucks under the promise of flexible scheduling, but management was not responding to availability requests. Additionally, he said some supervisors were frustrated because they were passed over for promotions by external hires.

Whitmire said that himself, Dalton, and a few other people formed a union committee in January. After they began their organizing efforts, Whitmire said Dalton was taken into a back room and harassed by a Starbucks district manager and a store manager.

Whitmire also said that management wanted Dalton to sign off on a write-up for misconduct that was wildly inaccurate and “outrageous.” He said they continued to target Dalton in numerous ways, likely in an effort to coerce her into quitting. Whitmire thinks that management went after Dalton, not himself, because she was “young, strong, and outspoken.

”The Scottsdale & Mayo location now has a union election coming up, with ballots due on April 19. Whitmire is not sure when the vote count will take place, and said Starbucks has made recent efforts to delay the vote count and prevent pro-union workers from attending.

“For any stores out there that are unionizing and that are having challenges, we know it’s really challenging out there right now. Stay strong and keep fighting the good fight. When we win our elections it’s going to be totally worth it. Because we’re going to be able to sit down at the table and have a voice in our workplace,” Whitmire told the Daily Dot.