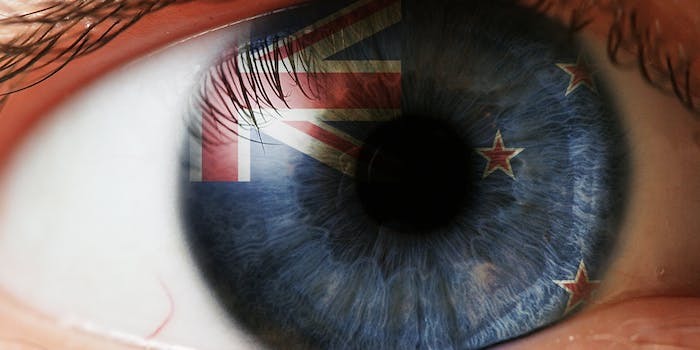 It doesn't get any bigger than this.

With the New Zealand general election less than a week away, a coalition of heavyweight Internet activists including whistleblower Edward Snowden and controversial entrepreneur Kim Dotcom came together on Monday for a high-profile press conference dubbed “The Moment of Truth” with the aim of exposing alleged falsehoods perpetrated by the New Zealand government about the country’s surveillance practices.

On Monday night in New Zealand, Dotcom and Snowden attended a press conference at the Auckland town hall, alongside investigative journalist Glenn Greenwald, Wikileaks founder Julian Assange, Internet Party leader Laila Harre and Dotcom’s lawyer Robert Amsterdam. Both Snowden and Assange attended by video-link—the former is in hiding in Russia, while the latter is holed up in the Ecuadorian Embassy in London due to allegations of sexual assault.

The queue for Moment of Truth outside Auckland Town Hall tonight #MoT pic.twitter.com/uvzBFQvXSc

The focus of the highly-anticipated event was the New Zealand government’s alleged spying on its citizens. The Prime Minister John Key has previously maintained that the country operates no mass surveillance program akin to the American and British programs revealed by leaked National Security Agency (NSA) documents last year—but new reports based off documents leaked by Snowden apparently contradict this.

A report by Greenwald and Ryan Gallagher published in The Intercept on Monday alleges that the country’s spy agency GCSB “worked in 2012 and 2013 to implement a mass metadata surveillance system even as top government officials publicly insisted no such program was being planned and would not be legally permitted.” 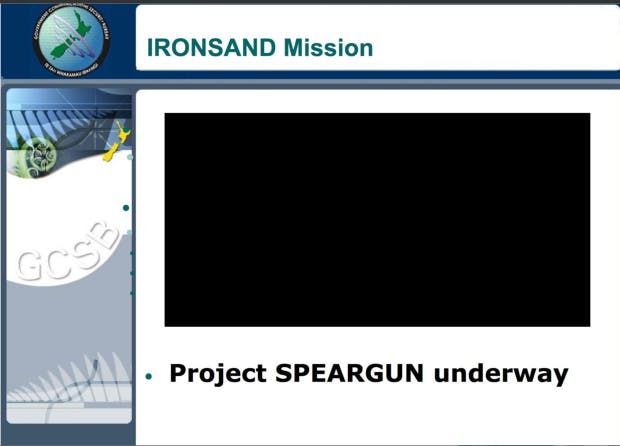 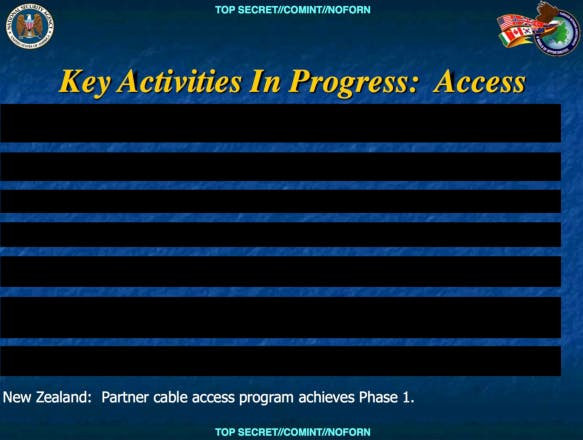 Screenshots of NSA documents that purportedly prove that New Zealand has actively pursued mass surveillance programs, rather than merely discussing them. Screengrabs via The Intercept.

In the run-up to the Moment Of Truth, the relationship between Greenwald and the Prime Minister John Key has been highly acrimonious—with the politician going so far as to label the journalist a “loser” and a “little henchman” of Kim Dotcom, who is currently battling extradition over copyright infringement charges.

Greenwald laughed these charges off at the conference, saying Key’s attacks are “the most adolescent epithets imaginable,” and that the Prime Minister has “no interest at all in dignity or statesmanlike behavior.”

Greenwald went on to attack the Prime Minister over his decision to declassify documents that “prove” he blocked the only attempt made to introduce mass surveillance. He argued that if Key can declassify it without “jeopardising public security,” it “should never have been marked classified in the first place.”

“It’s wrong of Key to take away the public’s seat at the table of government,” said Snowden, and [for Key to] say “‘you’ll simply have to trust us—unless it harms my reputation at which point I’ll throw classified documents in the air like I’m Julian Assange.’”

In 2013 Key promised to resign “if the spy agency [GCSB] were found to have conducted mass surveillance,” reports the New Zealand Herald. 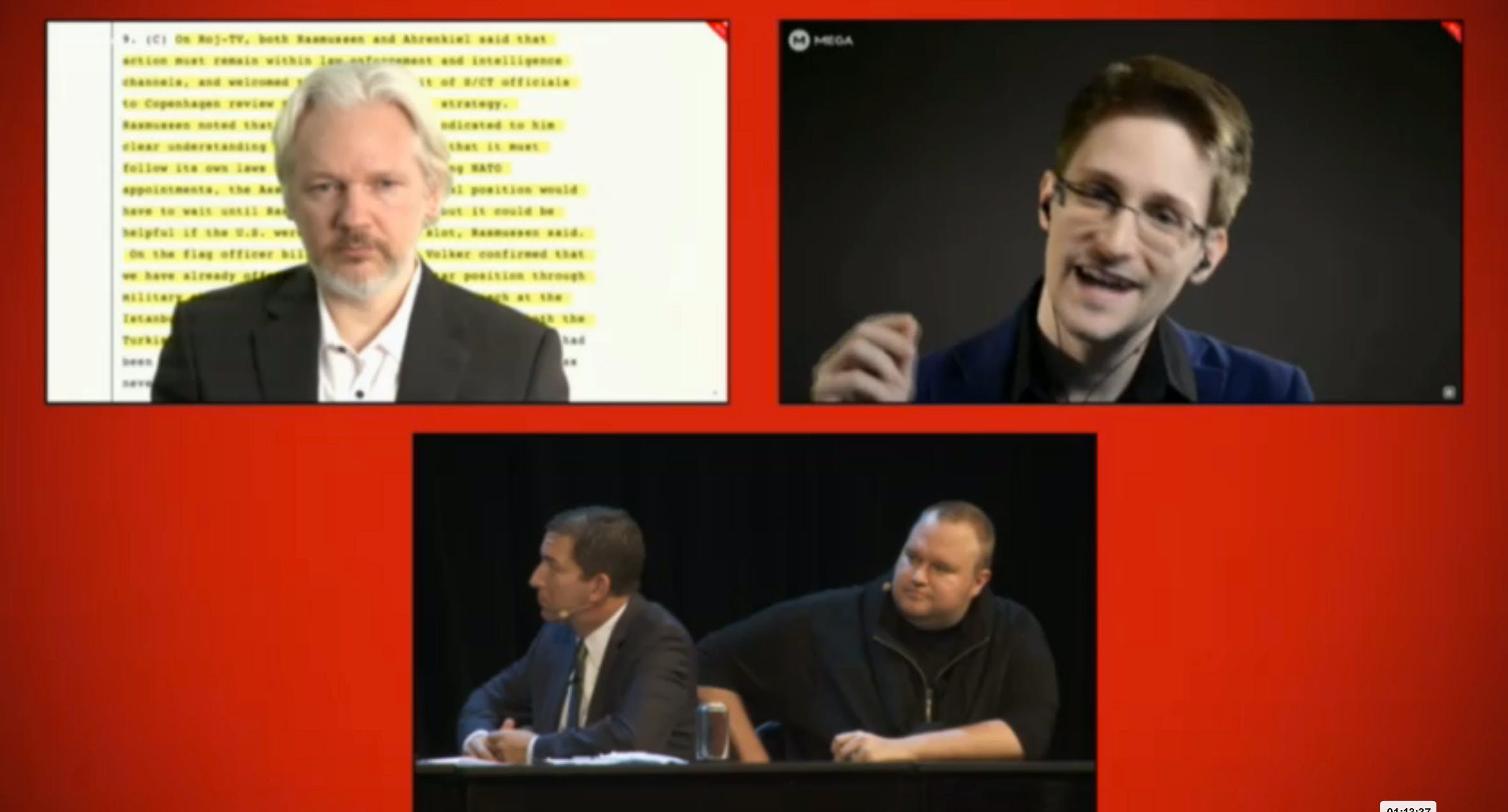 Throughout, Greenwald maintained he had no agenda, but was there “as a journalist … scrutinising and investigating the claims government officials make,” and had rejected the offer of a speaker fee from the Kim Dotcom-founded Internet Party.

The NSA-contractor-turned-whistleblower Edward Snowden claimed his own personal experience as an intelligence operative confirmed that the New Zealand government had access to the communications data of the country’s citizens. “To clarify, [surveillance program] XKeyscore does involve both metadata and content collection for individuals in New Zeland,” Snowden said. “That’s without question, citizens of New Zealand have their private communications in this database.”

The GCSB not only had access to the surveillance tool but actively “contributed to the development of XKeyscore,” he added.

The “Five Eyes” alliance between the U.S., Canada, the United Kingdom, Australia and New Zealand was also discussed, with the Australian-born Julian Assange labelling it as “not an alliance of countries but an alliance of intelligence agencies operating within those countries.” Kim Dotcom declared his intention to “close one of the five eyes” if the Internet Party wins the upcoming election.

Snowden also wrote a strident op-ed published by The Intercept on Monday, saying that Key’s claims that “there is no and there never has been any mass surveillance” are “false,” and that “this misuse of New Zealand’s spying apparatus for the benefit of a single individual is a historic concern.”

“What happens tomorrow,” Snowden asks, “when a different leader assumes the same power to conceal and reveals things from the citizenry based not on what is required by free societies, but rather on what needs to be said to keep them in power?”