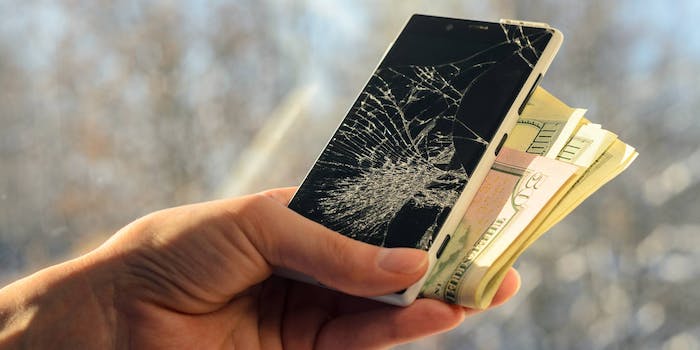 Forget about spending all that money on a new phone.

Smartphone manufacturers may soon lose the ability to monopolize authorized repair shops by keeping original replacement components to themselves.

If the bill passes, customers would have the option to fix their own phones using trusted replacement parts, and the hundreds of independent Apple repair companies could start repairing products using original components, instead of those from the Chinese grey market or recycled devices.

As Motherboard points out, the bills have been introduced in Nebraska, Minnesota, New York, Massachusetts, and Kansas. The legislation is being pushed by Repair.org, a lobbying group made up of independent repair companies.

“Every one of our members is in the repair business,” Gay Gordon-Byrne, executive director of the group, told Motherboard. “It’s very grassroots. Most repair businesses are very small, and it’s not hard to prove that.”

Their goal is to use the Motor Vehicle Owners’ Right to Repair Act as a guideline for the smartphone industry. The automotive version was passed in 2012, and requires automobile manufacturers to provide the same information to independent repair shops as they do for dealer shops.

Repair.org was close to passing its bill in New York the past few years, but it has been shot down by lobbying groups backed by Apple and other manufacturers. The group will try again early this summer.