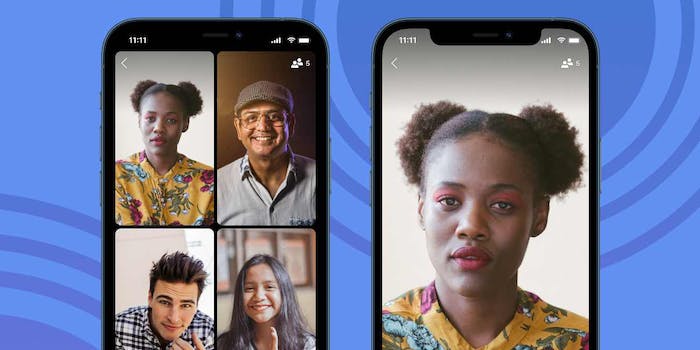 The popular encrypted messaging app just made it really easy to have a secure group video call.

Signal, the popular encrypted messaging app, launched the ability to have group calls—building on its video call capabilities.

The ability to have Signal group calls was launched as part of an update on Monday, the app announced in a blog post. The app has gained popularity for its strong reputation for end-to-end encryption.

Like messages on the app, the video calls are also end-to-end encrypted.

“2020 has seen its fair number of challenges and changes. We’ve all adapted to new ways of staying in touch, getting work done, celebrating birthdays and weddings, and even exercising. As more and more of our critical and personal moments move online, we want to continue to provide you with new ways to share and connect privately,” the company wrote in the blog post.

How to start a Signal group call

Starting a group call is pretty simple. First, make sure you have the latest version of the app.

For now, anyone wanting to start a Signal group call will have to create a new group chat with people they will want in the call. Once that new group is created, there will be an option in the upper righthand corner to start a new video call.

Users in the group will all then have the option of joining the call. The call is similar to other group video call apps like FaceTime or Google Meet, with every user viewable in a grid, or along the bottom of the screen with one user highlighted.

Group chats that were created before the group video call update will eventually support the feature, Signal said, adding that they will begin automatically updating “in the coming weeks.”

Can you use Signal group calls on PC or Mac?

Signal currently has desktop versions of its app for Macs and PCs, as well as those interested in using Linux, a more popular and secure operating system.

Previously, Signal had the option to have a video call with another user. The update on Monday now makes it possible to have a group call on the app.

How many people call be in a Signal group call?

One caveat for the new feature—for now—is the size of the call is limited. Currently, the Signal group call feature only supports five users, but the app says that will be expanded in the future.

While the new encrypted group call feature was clearly made with the knowledge that so many people have been staying inside and quarantining because of the coronavirus pandemic, Signal has also reacted to the realities of 2020 in other ways.

Over the summer, Signal introduced a feature to blur out faces in photos. The tool came as downloads of the app rose amid protests across the country against police brutality and racism after the death of George Floyd.