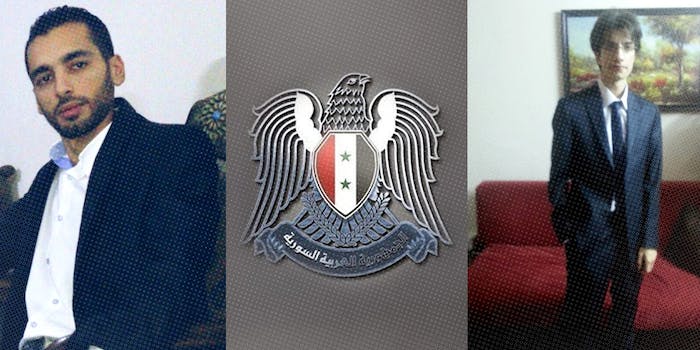 There’s a reward of $100,000 for information leading to the arrest of the hackers.

The FBI today unveiled charges against three Syrian hackers who successfully hijacked websites and social media platforms of the U.S. military and prominent American media organizations, including the Daily Dot.

Amad Umar Agha, 22; Firas Dardar, 27; and Peter Romar, 36, have been charged with multiple conspiracies related to computer hacking under the veil of the Syrian Electronic Army (SEA), a group that works in support of Syrian president Bashar al-Assad.

Agha and Dardar, who are believed to be in Syria, have been added to the FBI’s Cyber’s Most Wanted list. There’s a reward of $100,000 for information leading to the arrest of either.

According to the FBI, Dardar, also known online as “The Shadow,” extorted U.S. businesses for profit with Peter “Pierre” Romar. The duo would allegedly hold the computers they hacked ransom, threatening to destroy or delete data if they weren’t compensated. The Daily Dot was compromised by SEA in 2013 by a technique called “spear-phishing.” By posing as a staffer and sending infected links to other company employees, the group gained access to our content management system, deleted an article about Assad that they didn’t like (it was quickly restored), and left their mark on an unpublished article.

SEA’s list of victims also includes computer systems in the Executive Office of the President, a U.S. Marine Corps recruitment website, NPR, the Guardian, and the AP.

When the hackers hijacked the Associated Press’s Twitter account, they falsely claimed that explosions had rocked the White House.

The tweet spread like wildfire. The Dow dropped nearly 100 points almost instantly, though stocks did soon bounce back. “These three members of the Syrian Electronic Army targeted and compromised computer systems in order to provide support to the Assad regime as well as for their own personal monetary gain through extortion,” FBI assistant director Paul M. Abbate said in a statement.

“As a result of a thorough cyber investigation, FBI agents and analysts identified the perpetrators and now continue to work with our domestic and international partners to ensure these individuals face justice in the United States.  I want to thank the dedicated FBI personnel, federal prosecutors, and our law enforcement partners for their tremendous efforts to ensure on-line criminal activity is countered, U.S. cyber infrastructure is safeguarded, and violators are held accountable under the law.”