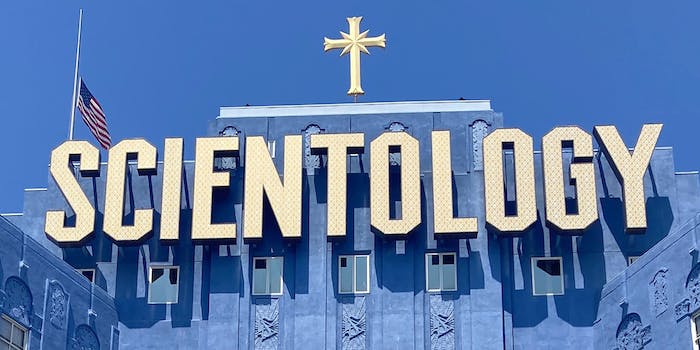 The wealthy organization continued to procure government funds offered due to the coronavirus pandemic.

The Church Of Scientology has continued to rake in Paycheck Protection Program (PPP) funds long after the initial rollout of the Small Business Administration’s (SBA) 2020 federal bailout, collecting 18 loans this year totaling $3,548,695, according to data released in May.

The Daily Dot previously reported that entities affiliated with the Church of Scientology collected 30 PPP loans, with subsequent reporting revealing it received another 50 Economic Injury Disaster Loans (EIDL). That brings Scientology’s running total of pandemic relief to $9,958,435 from at least 98 different federal loans.

Both programs are components of the Coronavirus Aid, Relief, and Economic Security Act (CARES) passed by Congress last year.

Scientology’s net worth is approximately $2 billion.

Scientology churches raked in a total of $415,567, for locations in Georgia, Michigan, New York City, Puerto Rico, and Washington, D.C.

Citizens Commission On Human Rights is a Scientology-funded entity whose website says is “dedicated to providing information that a multibillion-dollar pharmaceutical industry does not want people to see.” Its critics say it attacks mental health professionals. Regardless, it collected $307,440 for a location in Los Angeles.

Delphi schools and academies, Scientology-operated private schools, got a total of $1,468,173 for locations in Sheridan, Oregon; Milton, Massachusetts; and Lake View Terrace, California (under the name Applied Educational Concepts).

Applied Scholastics, True School, Clearwater Academy, Hubbard College, and the Foundation for Advancements in Science and Education (FASE), all operated by Scientology, received the remaining $809,916.

In a statement, a spokesperson for the SBA, Andrea Roebker, advised, “The data resource provided by the SBA … is provided by these PPP-participating lenders. It is dynamic and can change with each update, as loans do get canceled [or] different amounts are taken by the borrower.”

The Church of Scientology did not respond to requests for comment.