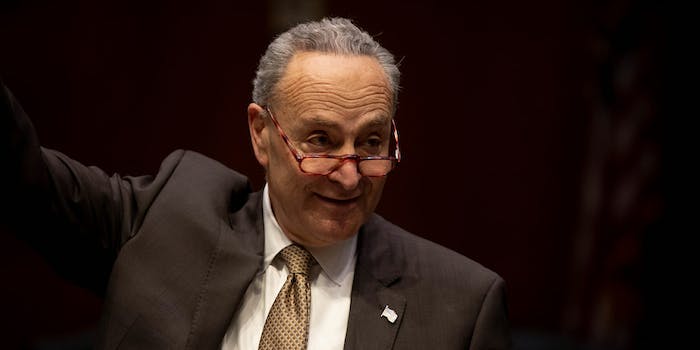 Senate Minority Leader Chuck Schumer (D-N.Y.) took a shot at President Donald Trump on Thursday, knocking the fact that the president handed out candy at the beginning of a meeting among lawmakers to discuss the ongoing partial government shutdown.

On Wednesday, there were conflicting statements on how the meeting went between Trump, Schumer, House Speaker Nancy Pelosi (D-Calif.), and high-ranking Republican lawmakers. The president called the meeting a “total waste of time,” and Schumer said the president threw a “temper tantrum” when Pelosi told him she would not support his plan to build a border wall along the country’s southern border.

However, House Minority Leader Kevin McCarthy (R-Calif.) said that Trump handed out candy at the beginning of the meeting, which included Butterfingers, M&Ms, and Baby Ruths, according to the Washington Post.

Speaking on the Senate floor on Thursday, Schumer again repeated his call for an end to the shutdown—and brought up the candy.

“After only a short time in yesterday’s meeting, the president got up, said ‘bye bye,’ and left,” he said. “Does that sound like someone who’s working to solve this impasse? Allies of the president pointed out that he passed out candy to start the meeting. With all due respect, President Trump: we don’t need candy. Federal workers need their paychecks.”

"Allies of the president pointed out that he passed out candy to start the meeting," Sen. Chuck Schumer says of yesterday's White House meeting.

Democrats have been sharp in their criticisms of Trump amid the shutdown, which has now lasted for 19 days. On Wednesday, Pelosi referenced money Trump reportedly received from his father when talking about the “financial insecurity” federal workers are facing by losing their paychecks as a result of the shutdown.