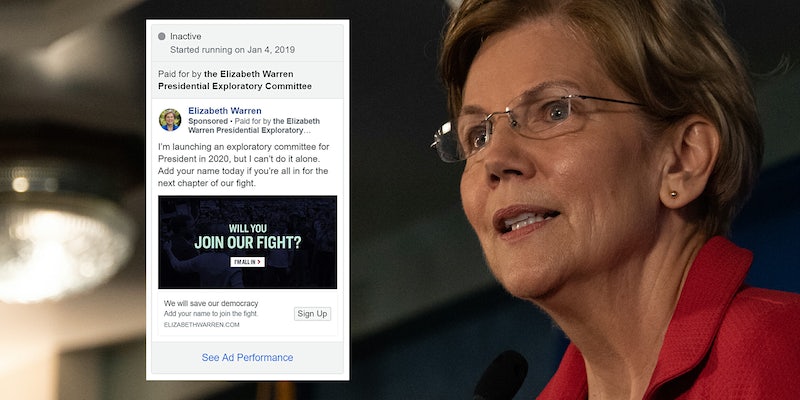 It's promising transparency, but it's not that useful.

Just before 2019 started, Elizabeth Warren announced that she would run for president in 2020. Warren was an expected name in the field, and her first step on the road to the White House was to launch an exploratory committee, which will be part of the arm she uses to fund her run.

Launching an exploratory committee is mostly a gimmick, but it allows candidates to raise cash through and allows reporters to follow what some of that money is used for.

Online ads are quickly becoming the dominant medium through which campaign communications. President Donald Trump’s 2016 team, led by the efforts of Brad Parscale, used Facebook ads to game the system and help land him in the White House.

Unsurprisingly, Warren immediately made moves to buy ads on Facebook. She launched two different ads—smart digital marketing teams will try out a number of messages and monitor the results to find which gets the most engagement.

We are able to see these advertisements because Facebook changed the way they handle ads after a disastrous 2016 in which it was revealed that Russians bought thousands of ads aimed at stirring up discord and supporting Trump. To combat this (and to help abate their PR nightmare) Facebook said in October of 2017 that only authorized advertisers can push electoral ads on Facebook the platform.

And you can now view some of the results of what candidates have done on the social network.

I never in a zillion years thought I was going to run for office. But today, hard-working families are under attack from every direction. Deliberate policy choices that once favored America’s middle class now favor billionaire campaign donors and giant corporations. It’s corruption – pure and simple. That’s why I’m launching an exploratory committee for President in 2020: to fight my heart out so that everyone gets a real chance in life. Add your name today if you’re all in for the next chapter of our fight.

And in another ad:

I’ve spent my career standing up to big banks and powerful interests. Now I’m launching an exploratory committee for President in 2020, and I don’t have binders full of bankers and CEOs to call for ginormous checks to launch this committee. That’s ok by me. This has always been a grassroots campaign — powered by 1.8 million contributions from people all across the country. Donate now to help us build the grassroots team we’ll need to win.

The first ad, which is shown below, directs the audience to ElizabethWarren.com, where you’re urged to add your name to her email list. This ad is actually inactive at the moment—it’s either been taken down or was scheduled to run for a short period of time and has expired.

But other than that, they don’t tell you much.

The ads have been getting looks from all sexes and ages; however, in almost every case, Warren has been getting this message in front of Californians more than residents of any other state. In the ads that the Daily Dot looked at, Texas and Florida were usually the other two states where the impressions (the number of times the target audience saw the ad on their screen) were the highest.

Those are also some of the most populous states in America, which would likely have more Facebook users.

ProPublica, a nonprofit newsroom, also has a helpful political ad collector that breaks down more significantly who the Warren team is targeting. According to their data, Warren is aiming for “people ages 18 and older who live or were recently in the United States.”

Unfortunately, the language gets even vaguer after that; ProPublica breaks down the target audience as “people who may be similar to Warren’s customers.”

Here’s how Ariana Tobin, an engagement reporter at ProPublica, explained that people who may be similar to Warren’s customers phrase to the Daily Dot:

“This is what Facebook calls a ‘custom audience,’ and it can mean a number of different things. The most straightforward is that there’s an option on Facebook called ‘lookalike audience,’ which is pretty much what it sounds like. So if a page is visited by primarily women who really like clicking on stories about sandwiches, a ‘lookalike audience’ might be women who like clicking on stories about sandwiches. It could also include conclusions pulled from friends and connections of those people who have already liked Elizabeth Warren. It might also mean a list of names, emails, phone numbers, etc. that someone behind that page produced for themselves. But we don’t know much more than that, which is why Facebook’s black box algorithm around targeting is so frustrating.”

Custom audiences were actually a very significant part of the Trump team’s strategy in 2016 and a powerful advertising tool. The Trump team used those custom audience settings to hit voters that were hugely important to them, voters in swing states that matched that certain profile, and in red states to boost his already strong support. They could deliver ads to people who potentially leaned Trump based on their Facebook usage, and hit them with ads that tried to turn them into reliable Trump voters.

Outside of Facebook, Warren’s digital marketing efforts have been nonexistent. Google also has a tool to look at how political advertisers are behaving and how their ads are doing. And while they have plenty of data for Warren’s Senate ads, there is nothing for her presidential race.

The only thing that comes up is this rather bland banner ad that was paid for by the Manhattan Institute, which is a right-wing think tank, but the advertisement directs to their website.

Warren also hasn’t bought any sponsored advertisements on Twitter, according to the microblogging platform’s tool that they use to track political advertisements.

Her early digital efforts reflect on the reason this marketing strategy is so enticing: it’s cheap.

Warren’s camp is rarely spending more than $500 on any of the ads that the Daily Dot looked at and in most cases, they’re probably spending less—Facebook puts most of their spending in their $100-$499 range. At the same time, these ads are getting tens of thousands of impressions. Most of them fell into the 10k-50k range. On ads in which she spent more (in the $500-$999 range), she was getting between 50k-100k impressions.

Compared to older methods like television advertising or billboards, it’s easy to see why Warren has quickly gone heavy on Facebook marketing. The value for her dollar on the platform blows other markets out of the water.

Facebook has caught a lot of heat for putting profits above morals and the tools that they’ve added are efforts to try to make the political game online more transparent. And while it’s better, it’s still not transparent enough. Facebook doesn’t tell us where these ads are targeted (was Warren pushing these ads to people in Council Bluffs, Iowa or Coronado, California). What age range is her team targeting and what are their political leanings? After all, people over 18 who have resided in the U.S. is pretty much the entire electorate.

These are all options that Facebook allows the buyer to select but that are hidden from us and without them, it’s rather difficult to get an accurate look at what a politician’s digital strategy might be.