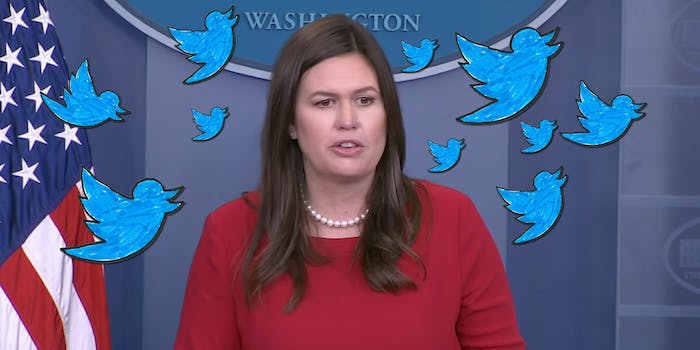 The new list of followers includes some interesting additions.

The official White House press secretary Twitter account, @PressSec, is no longer exclusive in which members of the media it follows.

By Wednesday morning, however, the account had added 28 additional members of the media to the list of accounts it follows. The additional journalists come from a variety of outlets including Fox News, the New York Times, NBC News, the Washington Post, and the Christian Broadcasting Network. At least one new organization represented on the following list, LifeZette, has been known to post articles with questionable accuracy.

Any casual news consumer would recognize some of the newly followed media members: Tucker Carlson of Fox News, Jim Acosta of CNN, Andrea Mitchell of NBC News, Hallie Jackson of NBC News, Mike Allen of Axios, and Chuck Todd of Meet the Press. Other new additions are perhaps more obscure to most Americans: David Body of the Christian Broadcasting Network, and Laura Ingraham of LifeZette.

Sanders did not respond to a request for comment for the Daily Dot’s original story. Asked Wednesday why the account jumped in the number of journalists it followed in the past 24 hours, Sanders told the Daily Dot the follower list was a remanent of the account’s “previous owners.”

“I can’t speak to why previous owners of the account didn’t follow more people,” Sanders said in an email to the DailyDot, “but I’ll continue to add members of the media particularly those that cover the White House as well as others.”

On Sanders’ old Twitter account, she followed more than 100 reporters from a wide array of media outlets.