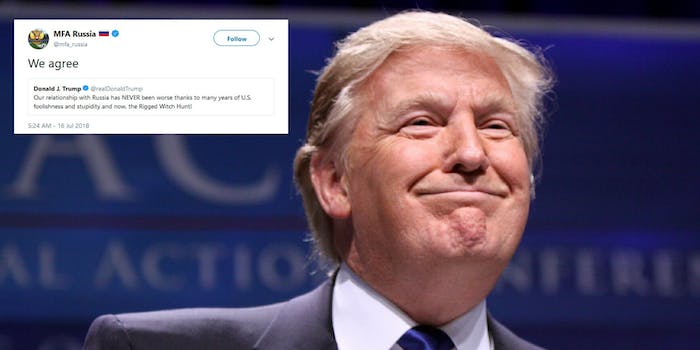 Trump receives ‘we agree’ endorsement from Russia on Twitter

They're on the same page.

The official Twitter account for Russia‘s Ministry of Foreign Affairs retweeted President Donald Trump on Monday morning where the president blasted the investigation into Russia’s interference in the 2016 election.

The tweet, which came just before Trump met with Russian President Vladimir Putin in Helsinki, blamed the investigation—which the president called a “rigged witch hunt”—and the “foolishness and stupidity” of American relations with Russia in the past.

“Our relationship with Russia has NEVER been worse thanks to many years of U.S. foolishness and stupidity and now, the Rigged Witch Hunt!” Trump wrote on Monday.

Our relationship with Russia has NEVER been worse thanks to many years of U.S. foolishness and stupidity and now, the Rigged Witch Hunt!

Trump’s lashing out against Special Counsel Robert Mueller‘s probe into Russia’s interference in the last presidential election comes just days after 12 Russian intelligence officials were indicted for their alleged roles in hacking Democratic National Committee (DNC) emails ahead of the election.

Earlier this year Mueller’s team also indicted 13 Russian nationals and three entities connected to the Internet Research Agency, a Russian “troll farm” that allegedly used social media to sow discord and spread misinformation ahead of the 2016 election. The indictment said the goal of the social media campaigns was “supporting the presidential campaign of then-candidate Donald J. Trump.”