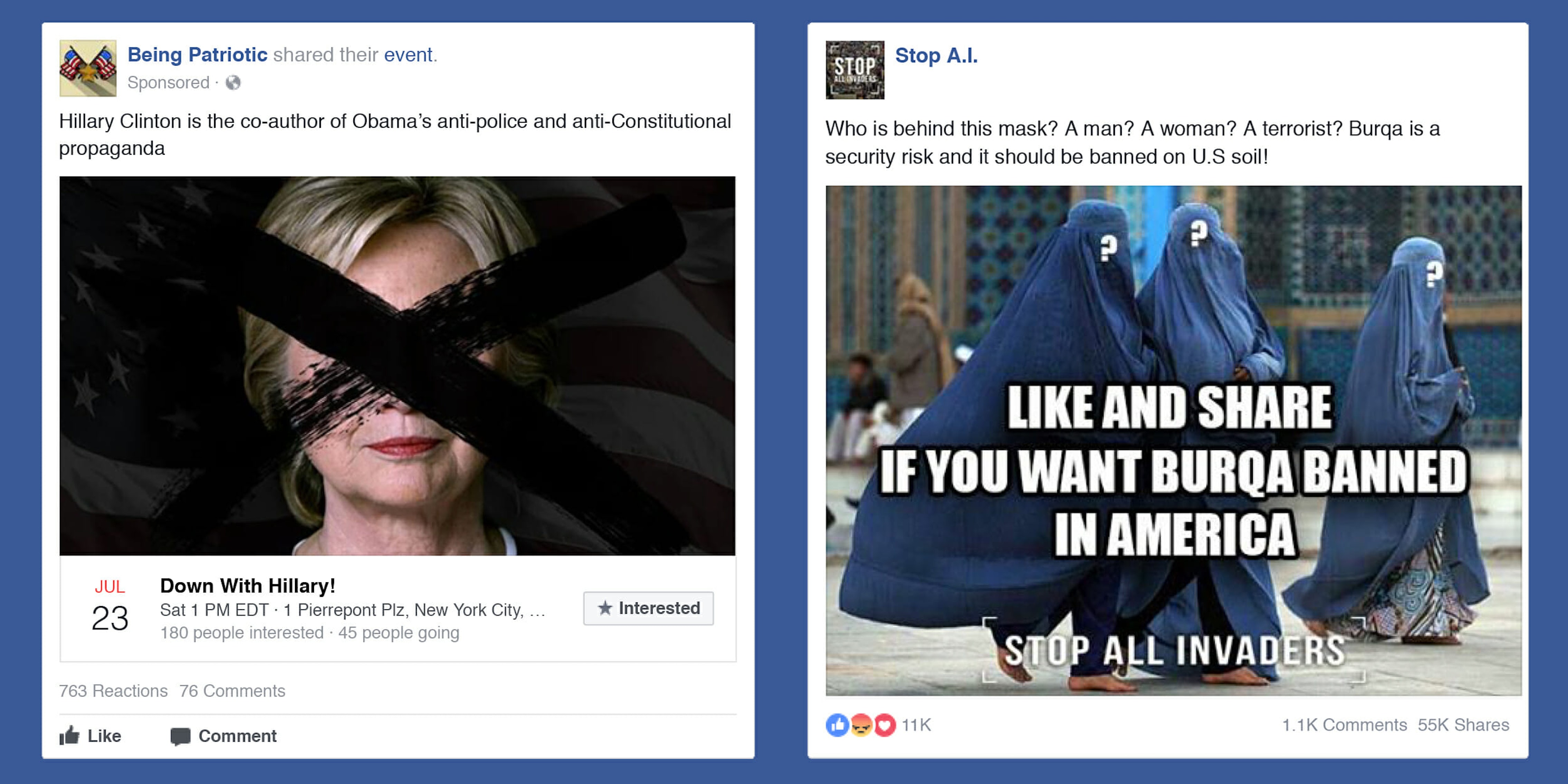 They are all over the place.

Facebook ads and memes created by Russia meant to influence Americans ahead of the 2016 election came from pages across social media–including ones with political, religious, and even seemingly normal accounts.

The House Intelligence Committee on Wednesday afternoon released a collection of ads Facebook flagged as linked to Russian operatives, giving the public a glimpse of the tactics used by Russia to influence Americans and sow discord ahead of last year’s election.

The ads came from innocuous names like “american.veterans” and “_american.made” or politically charged pages like “Born Liberal” and “Secured Borders.” The accounts even tried to rope themselves in with religion—“Army of Jesus”—and social movements, like “LGBT United” and “Black Matters.”

Along with the content of the Russia ads, lawmakers released metadata that shows Russian actors targeted Americans and figured out the best ways to influence voters and find people who would like, share, and respond to the contents’ messages.

Some ads were targeted at presidential candidates. One sponsored ad, from LGBT United, had a cartoon picture of Sen. Bernie Sanders (I-Vt.), a 2016 Democratic presidential candidate, telling those who saw it that there was a coloring book called “Buff Bernie: A Coloring Book For Berniacs” that depicted the senator with buff muscles in front of the White House.

Others targeted hot-button issues like gun control, immigration, and police brutality. An ad on Instagram, which is owned by Facebook, showed a man and young child pointing guns with the caption: “This is the way our children have to be raised. It’s not the promotion of violence. It’s the promotion of confidence…”

Another, sponsored by a page called “Heart of Texas,” posted a meme-like picture of a line of border patrol agents mounted on horses with the caption: “Don’t mess with Tx Border Patrol. Always Guided By God.” In the post, it blamed “Obama’s and Hillary’s policy” for “illegals” coming into the United States because “amnesty” was promised.

“Rapist, drug dealers, human traffickers and others,” the post reads. “The percent of innocent poor families searching for a better life is too small to become an argument for amnesty and Texas warm welcome.”

The ads were the subject of a lengthy series of hearings on Capitol Hill between lawmakers and representatives from Facebook, Google, and Twitter. Several lawmakers expressed their displeasure with how the tech giants are dealing with the proliferation of fake news and other disingenuous content meant to encourage dissent among American voters.

The House Intelligence Committee also released a list of Twitter accounts that are known to have been used by Russia in an attempt to influence Americans ahead of the election.

The committee released just a handful of the more than 3,000 ads Facebook turned over to Congress, as well as several Twitter ads from RT, a Russian state-funded outlet. Twitter recently banned RT and Sputnik, a similar state-run outlet, from buying ads on its network.

Facebook says Russia-linked accounts spent approximately $100,000 on ads, which the committee said reached some 11.4 million Americans. Facebook estimates that as many as 126 million American users encountered propaganda reportedly created by the Internet Research Agency (IRA), a Russian “troll farm” that is believed to have orchestrated much of the Kremlin’s influence campaigns. Twitter has identified 36,746 bot accounts linked to Russia that were responsible for some 1.4 million tweets, 131,000 of which the company believes are linked to IRA.

Here are a few other examples of the Facebook ads:

This ad ran from March 24, 2016, to March 25, 2016, and was targeted at people who liked LGBT United and friends of those who were connected to LGBT United. The metadata shows that 848 people saw the ad and 54 people clicked on it.