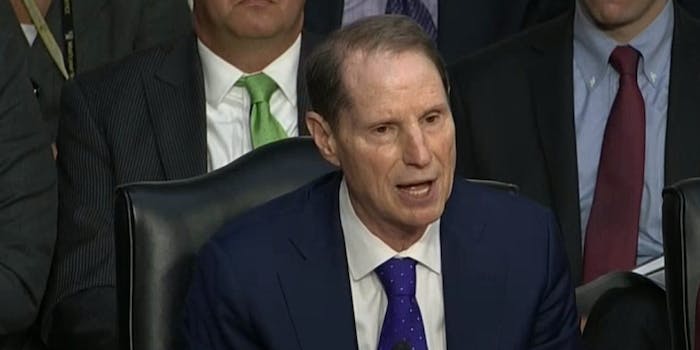 Sen. Ron Wyden (D-Ore.) dug into representatives from Google, Facebook, and Twitter during Wednesday’s hearing on how those tech companies were infiltrated by Russian actors and puffed up with “fake news” ahead of the 2016 election and beyond.

During a hearing of the Senate Intelligence Committee, Wyden said he believed the three tech companies didn’t understand how deep of a problem the interference and fake news was for the companies and asked them directly how they would fix the problem moving forward.

The three companies were used to “damage our democracy,” Wyden said.

At one point during the hearing, which at times left Wyden visibly frustrated, the senator asked if the companies were “satisfied” with their responses to Russian interference in the election.

All three companies said “no.”

Wyden said the influence campaigns went beyond fictional news and included fake advertisements, fake rallies, and protests that were “all presented under false pretenses.”

“You’ve discussed your response to the attacks, but it is self-evident, in relation to the powers your platforms now have, in the past election you failed,” Wyden said.

Wyden continued, saying the fake ads, fake users posting on Facebook, links on Twitter and videos on YouTube were used to “undermine” our society. The companies had a responsibility to use algorithms to spot the fake accounts, he added.

“You need to stop paying lip service to shutting down bad actors using these accounts,” he said. “You’ve got the power, and Congress has given you the legal protection, to actually act and deal with this.”

The companies argued that they had better technical resources to address future attempts to distort facts and influence Americans.

When asked specifically about what changes Google, Twitter, and Facebook would make to address fake ads, hoaxes, and fake users, the three companies said they are making strides.

Kent Walker, Google’s general counsel, said it is making an archive of ad content and putting icons on websites to show users where ads are coming from. As for fake news, Walker said it is working on its algorithms to spot fake news and putting fake news “labels” for users to be able to clearly see it isn’t factual.

Twitter’s acting general counsel, Sean Edgett, said its engineers are looking into it, and looked at “behavior and content” to seeing how automated are sending out messages. Edgett also announced “new transparency rules” about ads on the platform.

Meanwhile, Facebook Vice President and General Counsel Colin Stretch said 10,000 people are working on “safety and security” with plans to increase that number to 20,000. The company also will work on ad transparency that will bring greater “visibility” to ads, Edgett said.

Representatives from all three companies will continue their testimonies before congressional committees Wendesday afternoon at 2pm ET, when they appear before the House Intelligence Committee.