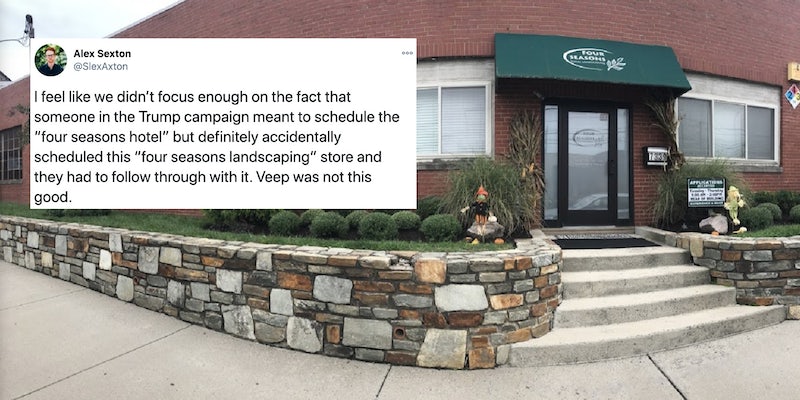 A press conference by the campaign ended up at a landscaping business instead of the iconic hotel.

President Donald Trump’s campaign team is getting roasted online after appearing to inadvertently book a press conference outside of a landscaping business in Philadelphia.

The press conference, which surrounded the campaign’s efforts to use legal action to overturn the results of the 2020 presidential election, was reportedly intended to be held with Four Seasons Hotels and Resorts but instead ended up at Four Seasons Total Landscaping.

The president, who has been in the hotel business for years, stated earlier on Saturday that the press conference would he held at the “Four Seasons.”

While everyone assumed the president was referring to Four Seasons Hotels and Resorts, Trump later tweeted that he had actually meant Four Season Total Landscaping.

It remains unclear if the president made the announcement before a venue was actually secured—leading his team to book another business with a similar name to save face—or if his campaign booked the wrong Four Seasons by mistake.

The Four Seasons Hotel in Philadelphia reiterated on Twitter that the event would not be held on their property.

The incident became even funnier after reporters arrived on the scene to find that the landscaping business was next to an adult book store.

Actor Patton Oswalt, a prominent critic of Trump, also noted that the business was across the street from a crematorium as well.

“This is not over. For we shall mount our righteous stand at Four Seasons Total Landscaping,” Oswalt tweeted. “Next to Fantasy Island Adult Books. Across the street from the Delaware Valley Cremation Center. Between the fire extinguisher and yellow hose.”

The Daily Dot attempted to contact the landscaping business, but the telephone number advertised by the company was out of service.