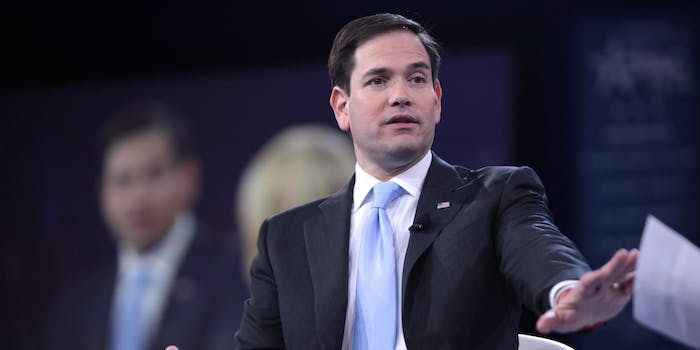 Rubio thinks Delta and Coca-Cola, should shut up about Georgia's voting law.

Sen. Marco Rubio (R-Fla.) thinks corporations should either keep their mouths shut or make a statement about every injustice in the world.

Rubio complained that Delta is “business partners with the Chinese Communist Party, the same … party that is committing genocide against Uyghur Muslims inside of China.”

He then called Delta, as well as Coca-Cola and other companies “who are out there proving to the world how woke they are,” hypocrites for making “billions” from the Chinese market.

Georgia recently passed a voting law that is among the more restrictive of a slate of laws Republicans have proposed since the November election. Many have criticized such laws for reducing voting access for minorities.

After facing public outcry, Delta and Coca-Cola, both of which are headquartered in Georgia, joined the chorus slamming the law.

People quickly went on the offensive over Rubio’s take, accusing him of hypocrisy for staying silent on matters such as his fellow Florida Republican lawmaker Rep. Matt Gaetz’s scandal.

Many also opined that it isn’t woke to oppose racism.

Others pointed out that Republicans like Rubio have no qualms about deeming corporations persons in the context of accepting unlimited campaign donations, but seemingly draw the line at them having opinions they don’t personally agree with.

Rubio was thoroughly dragged on Twitter, which always relishes ganging up on Florida’s senior senator.

“You don’t like hypocrites? My man, I have some really bad news for you…” one person commented on his video.

Republicans claim that these restrictive voting laws are necessary because of fraud in the 2020 election. There have been no reports of widespread fraud, in Georgia or elsewhere.