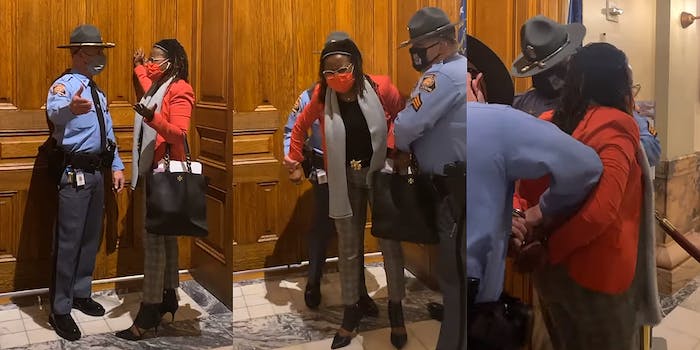 Georgia police were caught on camera arresting state Rep. Park Cannon (D) yesterday for knocking on Gov. Brian Kemp’s (R) door as he live streamed his announcement that he had signed an elections bill into law.

The new bill “imposes restrictions on absentee ballots, limits early voting, sets up an election fraud hotline, allows the state to take over county election boards, cuts the nine-week runoff election cycle down to four weeks, and even criminalizes handing food and water to people waiting in line to vote,” per Newsweek. Critics have accused the bill of suppressing Black voters.

Cannon and several other demonstrators assembled at the Georgia Capitol yesterday to protest the elections bill. In a video recorded and uploaded to Facebook by activist Tamara Stevens, one protester held a sign that said, “STOP Suppressing Our VOTE!”

Stevens’ video shows Cannon knocking on Kemp’s door as state troopers urge her to step back. A woman, presumably Stevens, demands to know why Cannon has to stop.

“The governor is signing a bill that affects all Georgians,” she says. “Why is he doing it in private, and why is he trying to keep elected officials who are representing us out of the process?”

The officers then place Cannon’s arms behind her back and handcuff her. They drag her across the floor of the Capitol and into an elevator as protesters shout at them.

“Why are you arresting her?” Stevens asks. “What is she in violation of? I want you to cite the code.”

Court documents obtained by the Atlanta Journal-Constitution show that Cannon was charged with “knowingly and intentionally” knocking on Kemp’s door in an effort to disrupt the bill signing. The warrant also charges Cannon with “stomping” on Officer L.T. Langford’s foot three times and “kicking L.T. Langford with her heels.”

Cannon announced via Twitter last night that she had been released from jail. “I am not the first Georgian to be arrested for fighting voter suppression,” she wrote. “I’d love to say I’m the last, but we know that isn’t true.”