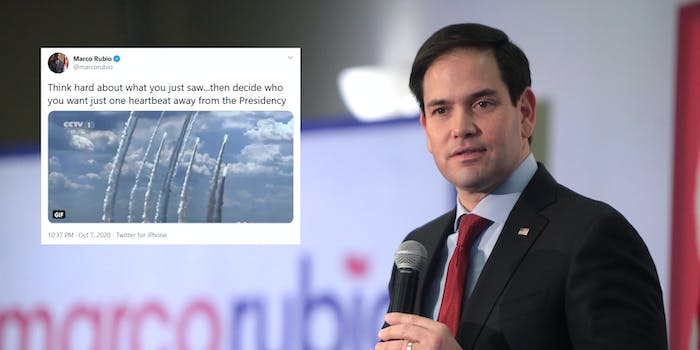 Marco Rubio’s ‘heartbeat’ debate tweet is getting ratioed into oblivion

Rubio has a pretty long and storied history of failing spectacularly at Twitter.

However, Rubio has a pretty long and storied history of failing spectacularly at Twitter. So it shouldn’t come as a shock that one of his debate tweets in particular is drawing a wave of mockery.

Rubio asked his followers to “think about what you just saw,” referencing the debate between Harris and Pence, and to decide “who you want just one heartbeat away from the presidency.”

The Florida senator’s tweet also included a GIF of missiles launching into the sky.

The GIF that Rubio chose to attach to the tweet appears to be from China Central Television, a state-run media outlet in China.

Also, as many people pointed out, if Rubio was trying to scare people about former Vice President Joe Biden and Harris winning the election, and thus having control of nuclear codes, it seems a bit ironic—considering he was extremely concerned about Donald Trump having that kind of access when the two were running against each other in the 2016 election.

With all of this taken into account, Rubio’s debate tweet has been resoundingly ratioed, with more than 23,000 people commenting on the tweet compared to just over 9,500 likes as of Thursday morning.

And there were a lot of responses to it.

This just adds to Rubio’s history of very bad tweets.