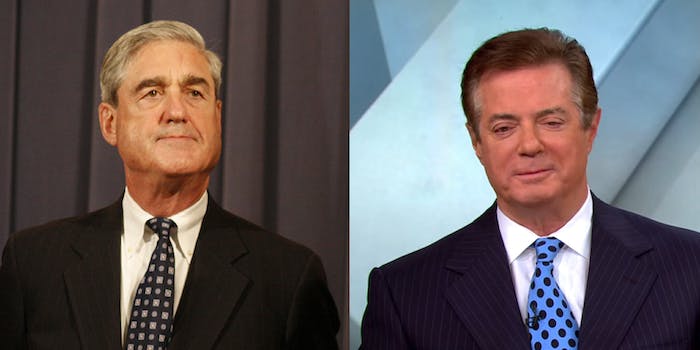 This comes as Trump's campaign manager is trying to get charges against him dismissed.

Special Counsel Robert Mueller revealed in court filings yesterday that his raid on former Trump campaign manager Paul Manafort was directly tied to the meeting Manafort took with a Russian lawyer in 2016 to allegedly get damaging information about Hillary Clinton.

Mueller, who is investigating the matter, raided Manafort’s house this summer, seeking “communications, records, documents, and other files involving any of the attendees of the June 9, 2016 meeting at Trump Tower, as well as Aras and Amin Agalorov.”

The meeting in question was with Natalia Veselnitskaya, during which Manafort was accompanied by President Donald Trump‘s son Donald Jr. and campaign adviser Jared Kushner after being promised “dirt” on Trump’s opponent.

Also named in the filing are Aras and Amin Agalorov, who’ve also figured prominently in the investigation, and who helped facilitate the Trump Tower meeting. The father and son are from a prominent Russian family that has ties to President Trump. Although everyone involved insisted the meeting went nowhere, it has fueled speculation that the campaign colluded with Russia.

The filing comes as Manafort has moved to have charges against him dismissed, and evidence from the raid excluded.