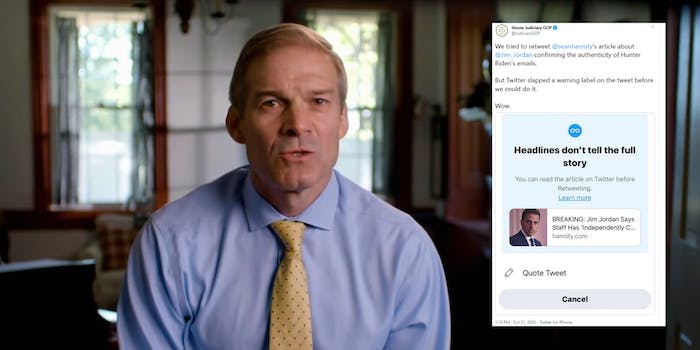 Republicans are miffed Twitter recommend they read an article before tweeting

It's not a 'warning label,' it is prompting people to read the story before retweeting.

Republicans in Congress are using a policy Twitter announced last month to continue their complaint that there is a bias against conservatives in Silicon Valley.

The only problem? It isn’t a warning label.

The tweet has a message that says “headlines don’t tell the full story. You can read the article on Twitter before retweeting.” That message is part of a policy the tech company said last month would be coming to all users as a way to “help promote informed discussion.”

Apparently the House Judiciary Committee didn’t care about this bit of information, and instead used the harmless prompt asking people to read an article before sharing it as a way to continue its attempts to label social media companies as biased.

“We tried to retweet @seanhannity’s article about @Jim_Jordan confirming the authenticity of Hunter Biden’s emails. But Twitter slapped a warning label on the tweet before we could do it. Wow,” the House Judiciary Committee GOP account tweeted on Wednesday.

Other Republican lawmakers also jumped at the chance to bash Twitter over the prompt asking people to read a story before retweeting it.

The National Republican Senatorial Committee also tweeted about the headline prompt, saying that the tech company was “censoring” inks to WinRed, a donation website. Twitter responded by noting that they are suggesting people read articles before retweeting them.

People were also quick to point out that other articles also have the same prompt.

Ever since Twitter and Facebook took steps to limit the spread of a New York Post story about Hunter Biden’s laptop, the claims of censorship and bias against conservatives have gone into overdrive.

Given that the policy was officially rolled out last month and had been being tested since June, Twitter jumped in to set the record straight with the Republican House Judiciary Committee’s tweet, as it had to with the Senate tweet as well.

“We’re doing this to encourage everyone to read news articles before Tweeting them, regardless of the publication or the article. If you want to Retweet or Quote Tweet it, literally just click once more,” Twitter’s communications team tweeted.

The House Judiciary GOP Twitter account hasn’t clarified anything as of Thursday morning, but it seems unlikely they will.