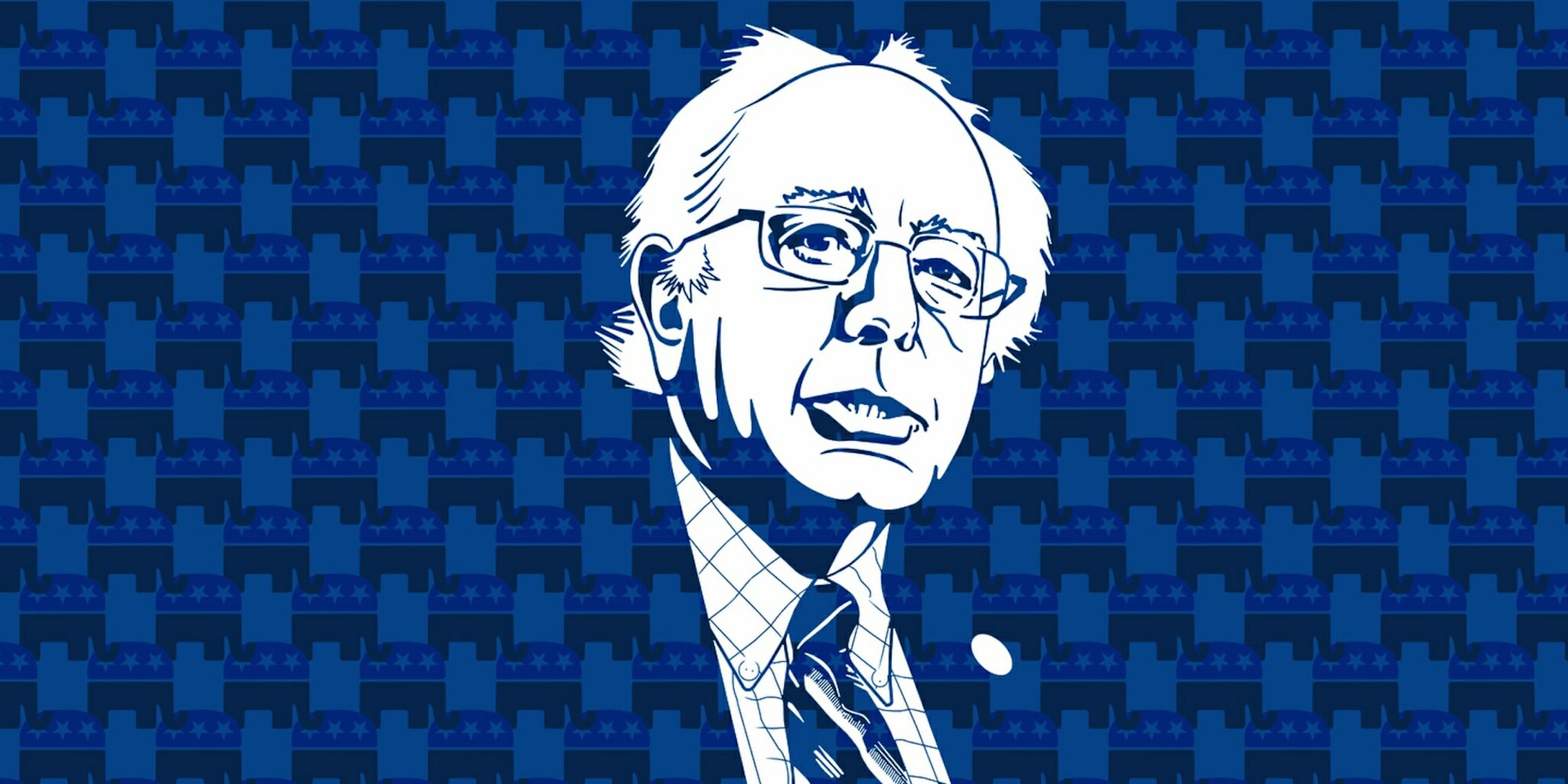 The Republicans who love Bernie Sanders

A fringe group in support of a 'fringe' candidate.

Many years from now, political scientists will cite the Republicans for Bernie Sanders Facebook group as one of many examples of the 2016 presidential election defying everything we know about voting behavior.

Back in 2008, or perhaps even in 2012, a dedicated group of Republicans supporting the junior senator from Vermont would have sounded like something out of The Onion or a sketch on The Daily Show. After all, why would any Republican vote for Bernie Sanders, a self-described democratic socialist in favor of universal healthcare, Planned Parenthood and expanding the social safety net?

A NBC/WSJ/Marist poll released Sunday suggests something funny is going on in the early-voting states of Iowa and New Hampshire, where Sanders is pulling a double-digit lead on Republican presidential contender Donald Trump among all registered voters.

“I just think that it’s in everyone in our nation’s best interests to live in a country with healthy, educated people.”

So, in this brave new world in 2016, Republicans for Bernie Sanders on Facebook is over 20,000 followers strong and growing. Last September, the group was only half that size. And while fringe Facebook groups shouldn’t be mistaken for a genuine political movement, the group’s large and fairly serious following may be a sign of the beginning of one. Especially in an election where “fringe” candidates such as Donald Trump, Ben Carson, Carly Fiorina and, on the opposite side of the spectrum, Sanders himself, have shown they have a special something up their sleeves.

On Facebook, at least, Sanders has the upper hand when it comes to cross-over candidates. As of this writing, the largest of the five Republicans for Hillary Clinton Facebook groups has 327 followers. The five Democrats for Donald Trump Facebook pages (consisting of two communities, two politician pages, and one fictional character) have a combined total of 177 likes.

But why is Sanders an attractive—or even viable—candidate for Republican voters, when even some Democrats consider him too left-wing?  The moderator of Republicans for Bernie Sanders justifies the unlikely match in the page’s FAQ section. The very first question asks, “As a Republican, how can you possibly agree with Bernie on every issue?”

“Speaking only for myself (the page administrator), the truth is that I don’t. Can any of us actually claim that? There are some issues on which I am to his “right,” and at least one issue on which I am to his “left.” But then hey, Bernie Sanders may be deemed to be to the right of Hillary Clinton on a couple matters as well. It sort of seems like only a narcissist would demand a politician who agrees with him/her on every point. Good politics are about honesty and compromise, and there may be no politician alive who understands this better than Bernie.”

While the anonymous moderator would not respond to The Daily Dot’s questions, he describes himself online as a “card-carrying Republican” and a  “Christian Caucasian male rural gun owner whose ancestors came over on the Mayflower.” He plans to register as a Democrat so he will be able to vote for Sanders in his state’s primary. And he isn’t the only one.

With primary season underway, many members of “Republicans for Bernie Sanders” are discussing how and when to change their party registration to Independent or Democrat so as to be able to vote for Sanders in their state’s Democratic primary. 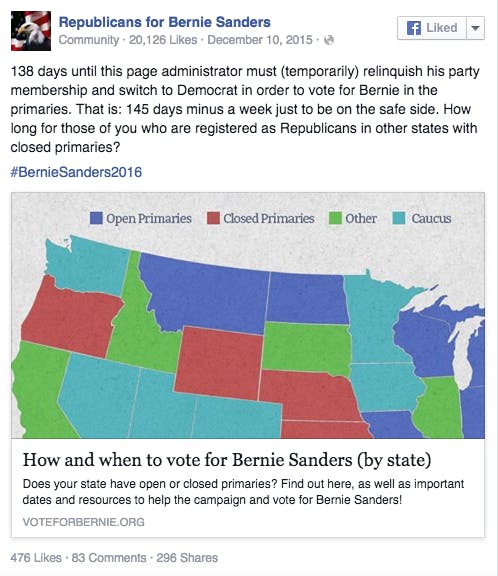 Republicans in battleground states like Colorado and Florida are using the Facebook group to discuss logistics like registration deadlines and whether their state’s election protocols will make the party switch easy. Some commented that they plan to switch their party back to Republican after voting for Sanders. One group member from Florida warned people not to wait until the last minute, writing that her voter registration still listed her as a member of the Republican party even though she made the switch a month ago. “Don’t wait! Mistakes are made. I’m personally going into the office tomorrow,” she wrote. 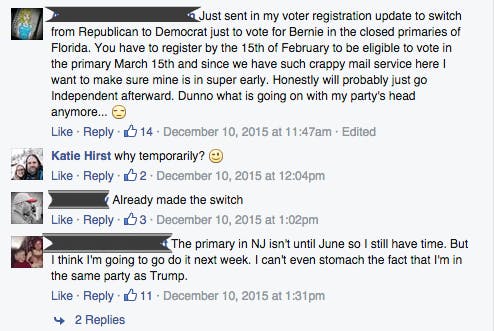 While switching parties to vote for Sanders is one of the more extreme examples, it’s hardly the only way group members show their activism. Republican Sanders supporters of all genders and ages, from both red states and blue states, gather on the Facebook group to post Sanders parody rap videos or discuss a recent Sanders op-ed derailing Wall Street. A mashup video likening Bernie Sanders to Republican deity Ronald Reagan garnered over 700 likes. In the video, we see a widely-circulated 1985 clip of Reagan decrying corporate tax loopholes, followed by a C-SPAN clip of Sanders decrying corporate tax loopholes and defending Social Security, followed by a clip of Reagan defending Social Security during the 1984 presidential debates. You get the picture.

In our conversations with current members of Republicans for Bernie Sanders over phone and e-mail, many spoke of being staunch Republicans but feeling disconnected from and frustrated with the current state of the Republican party. Many mentioned Donald Trump as a factor—but not the sole factor—that led them astray.

One member of the group said she was a pro-life, Evangelical Christian who had been a Republican for 40 years. She said one day she realized her disabled daughter could have benefited from the Medicaid expansion under Obamacare, which the Republican governor of her state refused.

That was the moment she began having doubts. Her eyes opened to how much partisan strife was being circulated on social media and Fox News, the only news channel she was told she should listen to. She noticed the Facebook posts her Republican friends would put up, things that she said she used to just accept as truth. But after doing some research, she concluded the opposite.

“I had learned to hate Obama, Hillary, and all Democrats and all my family and friends … still hate them. Again, I researched and discovered they are not the evil as presented on ‘Faux’ News,” she said.

She then researched every 2016 presidential hopeful candidate running, and she found them all to be lacking—except for Sanders. In the end, she said it was his commitment to not cutting Medicare and Social Security that impressed her.

“I had learned to hate Obama, Hillary, and all Democrats and all my family and friends … still hate them.”

Andy, a 27-year old mechanical engineer from North Dakota, told the Daily Dot that he found the Republican for Bernie Sanders Facebook page after doing a general search online for information about the candidate. He said the Republican party transformed from what he thought it represented. Many of his friends lost jobs after the oil boom went bust in North Dakota, so the Republican fight for Keystone Pipeline XL gave him further doubts. Living in a red state, he said he was drawn to the Facebook group because there were few people he could talk to about his doubts.

“So many people argue about how much Bernie Sander’s plans are going to cost, mainly health care and college,” said Andy, who said he switched his party registration to Independent, though he doubts it will matter by the time North Dakota holds its caucus in June. Fortune estimated that Sander’s plans would cost taxpayers $18 trillion over ten years.

But for Andy, it’s a simple matter of voting for what benefits the greater good. “I just think that it’s in everyone in our nation’s best interests to live in a country with healthy, educated people,” he said. “I think it’s very hard to argue against that. I wish more people understood that.”

For many in the group, the calculus is not that simple. Being both conservative and a Bernie Sanders supporter seems to be a delicate dance of choosing what aspect of the democratic socialist’s message resonates with their own values and willfully ignoring the rest. Posts on the Facebook page often re-frame Sanders talking points on gun control, abortion, or immigration into a message that resonates with Republican voters. Sander’s mixed record on gun control, then, proves not to be a deal-breaker. When last fall’s move to defund Planned Parenthood by Republicans in Congress again made abortion politics a topic on the campaign trail, the group’s moderator posted a photo of a girl with a sign that read, “Thanks to Planned Parenthood, I’ve never needed an abortion.” Above that photo was a quote from Sanders stating the fact that federal funding does not pay for most abortions:

For many Republican Sanders supporters, this may be all they need to hear. For most Republicans, however, it likely isn’t enough.

Photo via DonkeyHotey/Flickr (CC BY 2.0) | Remix by Jason Reed