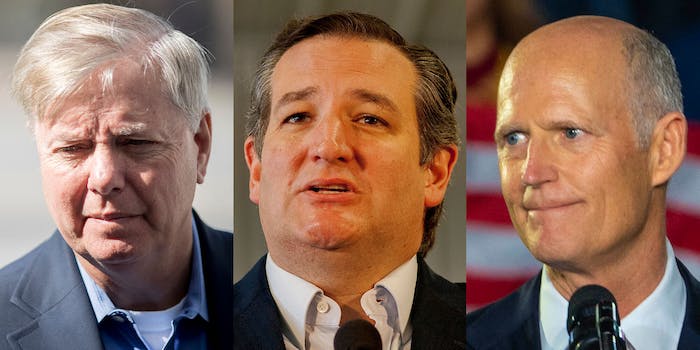 Things are getting really weird.

The coronavirus pandemic has Republicans acting extremely not OK on social media.

Things were already strange a few weeks ago. They’ve only gotten cringier since.

While self-isolating last week, Ivanka Trump tried her hand at becoming a coronavirus lifestyle influencer by tweeting out a picture of a living room campsite she made a few years ago. (As the Daily Beast pointed out, her dad knows a little something about kids in tents.)

Sen. Ted Cruz (R-Texas) is clearly getting a little stir crazy in isolation, and also, uh, creative or something.

Check out this “name that senator” emoji game he recently played. Whoever Cruz thinks of as “fish pirate” is probably less than pleased. “Blue square cigarette” seems pretty cool though.

For his part, Arkansas Gov. Mike Huckabee is bringing what he clearly thinks are jokes. As John Oliver would deadpan, “Cool.”

Political commentator Pat Buchanan, on the other hand, is digging up cartoons that manage to be simultaneously deeply unsettling and nationalist.

Liz Claman of Fox News has reached the point of isolation where she’s doing market reports in a Final Four T-shirt and tweeting pictures of empty lasagna pans. It’s not clear why on either front.

Lou Dobbs, also of Fox News, decided that since he was stuck at home, we all needed to see him getting a tongue bath. We didn’t.

Other Republicans have laid off the cringe and upped the partisan shrillness amid the coronavirus. [We’re looking at you, Sens. Lindsey Graham (R-S.C.) and Rick Scott (R-Fla.).]

To their credit, a few have actually found their way to the high road. Rep. Doug Collins (R-Ga.) urged compassion during the crisis. Cruz defended comedian Kathy Griffin, whose mother recently died.

Maybe their comrades will learn by example.