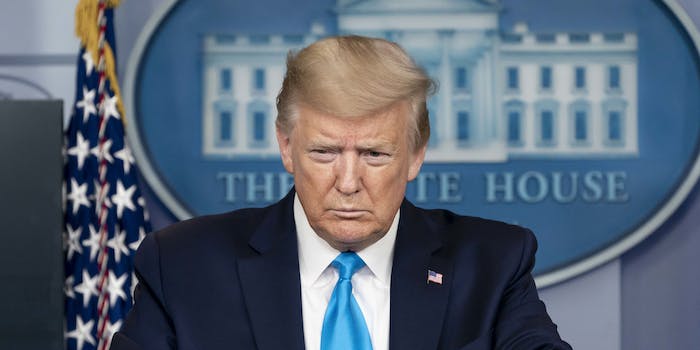 The emails show officials were concerned about the virus early on.

Public health experts predicted that social distancing and school and public gathering closures would be inevitable because of the coronavirus weeks before President Donald Trump finally recommended them, a cache of leaked emails show.

The New York Times published the emails—a chain that was called “Red Dawn” after the 1984 movie—where members of the Department of Homeland Security (DHS), Veterans Affairs (VA), Health and Human Services (HHS), Centers for Disease Control and Prevention (CDC), and others discussed the spread of the coronavirus, with emails dating back to January.

In February, some of the experts were already suggesting that social distancing would be needed to stop the spread of the virus.

The president did not make that recommendation until mid-March.

“I think we can strategically roll out some of the social distancing recommendations,” Col. Matthew Hepburn wrote on Feb. 9, adding: “This can be part of the public messaging.”

Dr. Eva Lee, a researcher at Georgia Institute of Technology, responded: “We need the citizens to know and practice social distancing in a way that best protect them. Every action counts.”

Many of the experts began talking about NPIs, or “nonpharmaceutical interventions.” The CDC describes NPIs as “actions, apart from getting vaccinated and taking medicine, that people and communities can take to help slow the spread of illnesses like pandemic influenza.”

Similarly to Lee, James Lawler, an infectious disease doctor, added: “I think we also mostly agree without dramatic NPI we can expect 30-40% infection rate by end of community epidemic –and even with dramatic NPI, that total may only be slightly reduced.”

The next day, Lee said the Diamond Princess cruise ship infections “reinforces the notion that NPI as in social distancing has to begin now, not later… there’s no harm to do it, but there can be a lot of regret if not.”

A week later, Carter Mecher, a medical adviser at the VA, wrote to the group that “NPIs are going to be central to our response to this outbreak (assuming our estimates of severity prove accurate).”

In March, the remarks from experts became even more stark:

“We need actions, actions, actions and more actions,” Lee wrote on March 2. “We are going to have pockets of epicenters across this country, West coast, East coast, and the South. Out policy leaders must act now. Please make it happen!”

As experts began discussing the need for social distancing in February, the president was sending mixed messages to the public.

In early February, Trump said he had a “long and very good conversation with China’s President Xi Jinping about how the country would be “leading the counterattack on the coronavirus.”

A few weeks later, he claimed that the coronavirus was “very much under control in the USA” and that his administration was doing a “GREAT job” of handling the virus.

Just a few days after those tweets, the president also tried to blame the media for making the virus look “as bad as possible” to make the stock market downturn.

The president recommended that the public not be in groups of more than 10 and to work or be schooled at home during a press conference on March 16.

Late Sunday, the president pushed back at the New York Times report about the Red Dawn emails, reverting back to a typical tactic: calling it “fake.”

“The @nytimes story is a Fake, just like the ‘paper’ itself. I was criticized for moving too fast when I issued the China Ban, long before most others wanted to do so. @SecAzar told me nothing until later, and Peter Navarro memo was same as Ban (see his statements). Fake News!” the president tweeted.