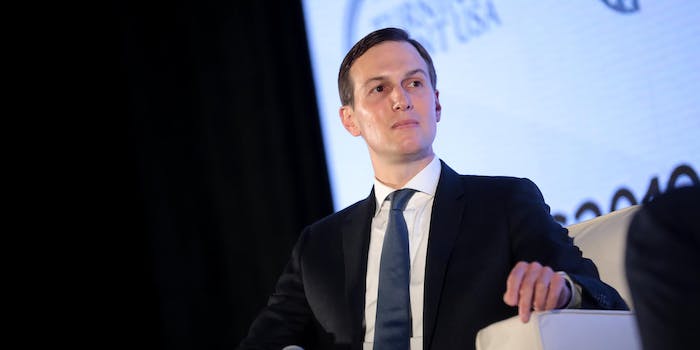 One lawmaker said he was 'deeply concerned' about such a database being created.

A task force led by Jared Kushner, a White House senior adviser, is looking into potentially creating a national coronavirus surveillance system to track patients and hospital availability, according to a new report.

The idea has already faced pushback from advocacy groups and lawmakers.

Kushner’s team has reportedly reached out to health tech companies to develop a system that would scoop up data from private databases to allow the federal government to look at hospital bed availability and patient flow in emergency rooms, Politico reported late Tuesday, citing several sources.

The goal, it appears, would be to use the collected data to deliver resources to combat the coronavirus across the country.

A White House spokesperson told Politico that Kushner had “no knowledge” of the idea.

However, the idea of such a database has already faced immense pushback from privacy groups and even one senator.

Albert Fox Cahn, the executive director of the Surveillance Technology Oversight Project (STOP), called such a database “deeply dangerous” and questioned what would happen to the health information of Americans.

“A federal health database would be deeply dangerous,” Cahn said in a statement. “We cannot trust the Trump administration with the health records of millions of Americans, especially if the data is collected without any protections against misuse by law enforcement or ICE. Not only will a hastily-built database have errors, the data will almost certainly be used by government agencies for investigations that have no connection to COVID-19.”

Meanwhile, Sen. Edward Markey (D-Mass.) said the Trump administration has not given him confidence that they would create a health information database that “doesn’t undermine our fundamental right to privacy.”

“I am deeply concerned to see reports that the White House wants to create a vast surveillance network involving sensitive information about the American people,” the Massachusetts senator said in a statement, later adding: “In moments of crisis like this, we should not simply accept the declarations by some in power who will tell us that we have to stray from the guiding principles and civil liberties that make us who we are. They are wrong. We do not have to forgo all privacy in a pandemic nor watch a surveillance state take root.”

Markey added that he will be asking the White House for more information about the reported proposal.