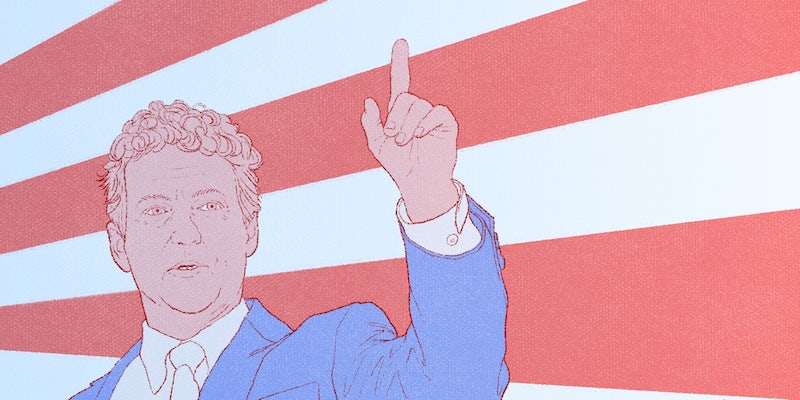 Rand Paul is running for president

He's currently in a four-way tie for the Republican nomination.

And now there are two.

Sen. Rand Paul (R-Ky.) announced on Tuesday his plan to run for president of the United States in 2016.

“I am running for president to return our country to the principles of liberty and limited government,” Paul announced on his website.

Paul is scheduled to officially launch his campaign around 11:30am ET today, in a speech that will stream on his campaign website, randpaul2016.com. In the meantime, he is taking questions from the public via his Facebook page.

Few are surprised by Paul’s 2016 run. He has repeatedly hinted at his presidential ambitions, and recently released a video that opens with the line, “On April 7, a different kind of Republican will take on Washington.”

Known as a staunch libertarian (well, sometimes), Paul often strays from his Republican colleagues on key issues. In 2013, for example, he held a 13-hour filibuster against the CIA‘s use of drones during the nomination of John O. Brennan as head of the Central Intelligence Agency. He has also opposed National Security Agency (NSA) surveillance of Americans (to greater and lesser effect) and has a history of working with Democrats on certain issues, such as medical marijuana reform.

Ahead of Tuesday’s announcement, Paul changed his Twitter handle from @SenRandPaul, which is now defunct, to simply @RandPaul. A practicing ophthalmologist, Paul also changed his bio to identify him as Dr. Rand Paul, a status he apparently plans to push hard as he fights his way to 1600 Pennsylvania Ave.

Paul is also asking Americans to get in on the action. In addition to his Facebook Q&A, he released his official campaign logo and asked graphic designers to mock up their own versions, a plan that is sure to not end in embarrassing memes.

This is your campaign. Here's a link to our logo for graphic designers across the country to use>>> https://t.co/58EOcNC99n #rand2016

At the moment, Paul trails Bush and Walker in the polls and sits in a four-way tie with Cruz, Huckabee, and retired neurosurgeon Ben Carson for the 2016 Republican nomination.