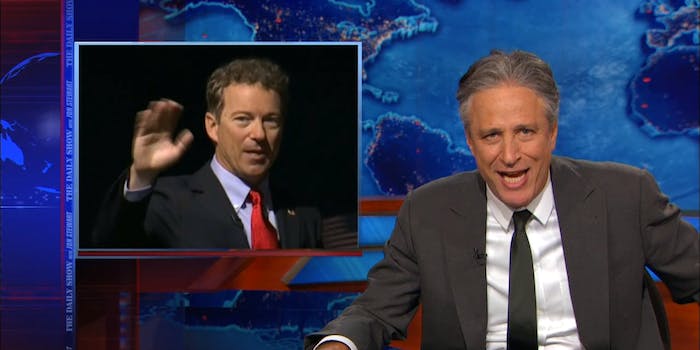 'At this point even Hillary Clinton was like, 'Just announce already, please.''

Sen. Rand Paul (R-Ky.) announced his intention to run for president Tuesday after saying seemingly everything but the magic words at his announcement event. On Tuesday night’s Daily Show, Jon Stewart knew just how to mock the newest entrant into the 2016 presidential field.

Paul left the mandatory college assembly out of it, but even after he’d announced on social media, it took him more than an hour to actually tell the enthusiastic crowd that he was running. Plenty of people took the podium to praise him before his appearance. His wife talked about how she originally thought he was 18, and a young girl sang the National Anthem, proving that the senator can at least spot vocal talent.

As Stewart noted, Paul probably could have raised quite a bit of money by running commercials in the middle of the hours-long event.

We can only hope that this isn’t how the Republican presidential debates will go.