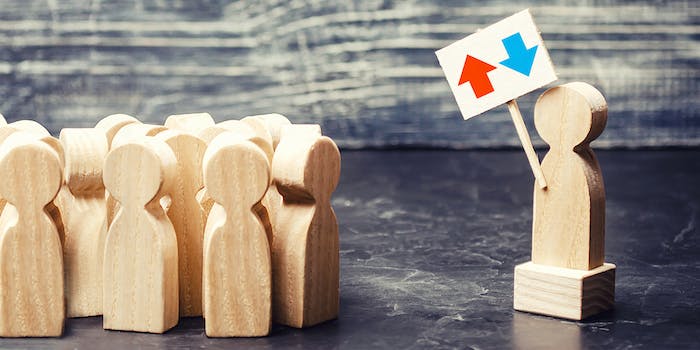 The subreddit has devolved into pro-Trump, anti-vax content under Axolotl_Peyotl.

On Thursday, the moderator team of Reddit’s r/conspiracy announced its former head mod, Axolotl_Peyotl, had been removed as a moderator of the subreddit and permanently suspended from the site.

“We hope this doesn’t cause too much disruption in your community or modteam, especially given recent events,” site admins continued in the message, which was verified by the Daily Dot. “While we do not make these decisions lightly, we need to ensure that moderators are not inciting their communities in ways that break our content policies.”

“By trying to overturn this election, they are placing more trust in Reddit conspiracy theories over the Constitution,” Duckworth said Wednesday night, referring to the Republican members of Congress who objected to the election results.

While Reddit has worked in recent years to curb misinformation, r/conspiracy has remained a haven for fringe ideas, particularly those from the far-right. According to one analysis, the subreddit saw a consistent crossover with the pro-Trump r/The_Donald subreddit before The_Donald was permanently banned for hate speech this past summer.

Axolotl_Peyotl often shared this type of content, with many of his recent posts promoting election fraud conspiracies. In a final message to r/conspiracy, he pushed “Italygate,” which baselessly purports the election was fixed by an international coalition that includes President Barack Obama and a former Italian prime minister. The conspiracy theory began circulating on social media platforms at the end of last year and has become popular primarily with QAnon supporters. Axolotl_Peyotl’s thread on the topic has more than 1,000 comments.

User AssuredlyAThrowAway, who is now head mod of r/conspiracy, called the decision to remove and suspend Axolotl_Peyotl heartbreaking “in so many ways, and for so many reasons,” noting that he was a moderator for the forum for nearly seven years. The move was also denounced by a number of commenters, some of whom called it “censorship.”

However, others cheered Reddit’s actions, saying the former head moderator had a documented penchant for banning those who disagreed with him and elevating those who shared his often-extreme views.

In a post on r/SubredditDrama sharing the news, u/-GovernmentBirdDrone called out Axolotl_Peyotl over some accusations that had plagued him over the past few years as the moderator of r/conspiracy.

“axolotl_peyotl was a far right, extreme pro-Trump, anti-vaxx, anti-Semitic moderator and was notorious for their itchy trigger finger on the ban button,” they wrote.

Those accusations have lingered on the site for some time. Six years ago, axolotl_peyotl took heat for stickying a pro-Hitler documentary to the top of the subreddit, which sparked accusations of anti-Semitism. He also faced accusations of banning users for disagreeing with an anti-vax stance and trawling through user histories to find reasons to ban them.

Axolotl_Peyotl has also weighed in on his mod removal and suspension on conspiracies.win, another conspiracy-minded site he’s been pushing on Reddit for the past month. The then-top mod knocked Reddit while promoting the new forum, writing, “There’s already considerable more freedom at conspiracies.win…like a breath of fresh air. So many old time r/conspiracy folks are already there that got banned by the admins back in the pizzagate days, etc.”

For those familiar with r/The_Donald, this might all sound familiar—mods on that subreddit similarly used Reddit to launch their own .win site, where conspiracy theories now run rampant.